PAX East has come and gone, but it left us with a ton of amazing stuff to talk about in regards to community feedback and upcoming content. Devstream #73 let us explore these ideas a little more in-depth as well as take a look at some sneak-peeks of changes that are coming down the pipeline.

Didn’t catch the discussion live and want to see what it is we’re talking about? You can watch it here and see it all unfold. For those of you less concerned with the visuals or who want to cut to the chase, we’ve laid out all the details below: [1]

TennoCon tickets are on sale now! The event is happening on July 9th in London, Ontario, CANADA (not where the Queen lives), so be sure to mark your calendar and grab yours now before they sell out! Go here now to get'em: www.warframe.com/tennocon

Console Tenno experienced a wave of new content with the Hallowed Guardian release last week. Highlights include the Oberon Deluxe Skin, Sibear, and Zhuge, but also more customizations for their Warframes and Orbiter. New Sortie missions and Sortie Season 6 Rewards were shipped with the update as well, which will come at a later date!

PC Tenno may have noticed a new event this week, headed by the Steel Meridian syndicate. Kela de Thaym has made a comeback and has started a new reign of terror by forcing Grineer defectors into a rigged trial by combat. The challenge is yours, Tenno, to stop this injustice by facing the executioners yourself. Various rewards and potential glory for your clan are there to sweeten the pot, if you are up to it.

Warframe is getting a sport! We discussed in more detail the Lunaro trailer that was released during the Warframe Developer and Community Panel at PAX East. The new game mode, which is based on Ulama (think the Road to El Dorado), will be a more accessible way for players to earn Conclave standing outside of the fast-paced, ‘elite’ version that exists now. Lunaro’s release will involve further exploration of the Syndicates and Conclave Syndicates as players bullet jump their way to victory.

Steve has released to the public his mysterious Bourbon List. While its title may lead you to think otherwise, its focus is on the big picture questions and problems surrounding Warframe and how they manifest in the game, especially those brought up by amazing members of our community.

The usual cast was joined by Kary from the art department this week to show off his amazing PBR work. PC Tenno may have noticed that Ember Prime, Excalibur Prime, Nyx Prime and Rhino Prime are looking a little shinier after the Rathuum update!

Devstream 73 took a turn for the cute with a sneak peek at Kavat animations. The ambient behavior of the kittens that we showed (including sleeping and chasing a laser) made these adorable creatures seem a little less deadly, but don’t be fooled! Players who want to see them in action, as well as learn a more information about their size compared to Kubrows, can watch the stream on our YouTube channel.

This week’s guest, Kary, had even more exciting content for fans of the redeemer and those wanting to channel a more specific type of ninja: the teenage mutant turtle kind. 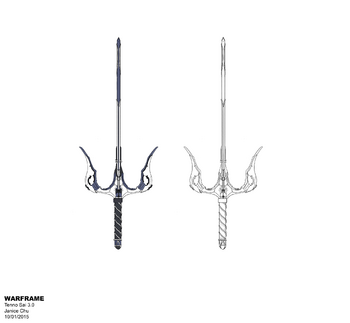 These Sais will be dual wielding daggers. Cowabunga, dude.

Psst.. we are completely overhauling the Market, again. The market is being revamped to better accommodate the expansion of content within Warframe. In the future, players can look forward to improved organization and categorization of items, easy search filters, and even a “hide owned” button. During this process, we are also reviewing the prices of certain products, including Credit and Fusion Core packs.

Several updates are planned to help improve the Archwing system. Some of the least popular game modes will be retired and replaced with a host of new mission styles, including Archwing racing and spaceship pursuit. A rework of the flight model is also in the works to make movement more fluid and to make it feel more like space flight.

The next round of TennoGen content has been released and Frost fans should be overjoyed. Below is a list of all the accepted submissions:

We’re still trucking away at Volt’s upcoming changes, including a revamp of his Shield ability. After placing a shield, Volt will soon be able to pick up a smaller version of it and carry it around at a continuous energy drain cost. Tenno can melee and shoot through it, with the added functionality of ramming into enemies and zooming around maps with their own riot shield. The idea was originally pitched by the community for an Augment, but it was so genius that we had to implement it at the base-level.

Join us this Friday, April 29th for Devstream #73!

Who: Rebecca is joined by Steve, Geoff, Scott and Devstream first-timer Kary! Kary is our resident Weaponsmith, and we're thrilled to bring him on the couch. Hopefully he is too :P!

What: Hot off the PAX East hype, we're ready to sit down and dive deeper into what reveals we showed and give some updates on upcoming rework and QoL items. We'll also be revealing the next round of TennoGen content coming to the Steam Workshop!

When: Join us this Friday, April 29that 2 p.m. EDT! Time Zone Converter: http://www.worldtimebuddy.com/

Retrieved from "https://warframe.fandom.com/wiki/Devstream_73?oldid=1304586"
Community content is available under CC-BY-SA unless otherwise noted.