The Second Dream is live on all platforms but that doesn't mean we're done making updates yet! The Focus System has plenty of changes ahead and our bi-weekly Devstream is the perfect time to discuss what's ahead in the future of Warframe, as well as a few upcoming changes that will help improve the quality of life for Tenno around the Solar System!

If you're looking for the fine details, here's what you may have missed:

Given the extreme popularity of the Deluxe Skins we've created so far our artists are hard at work designing new skins for each Warframe. Making sure every Warframe has an awesome Deluxe Skin is our goal, but it will take some time for us to cover them all.

We'll be sure to let you know when new Deluxe Skins are in development. Just like…

Zephyr's Deluxe Skin is going through some rough prototyping, and while this may in no way represent the final product we thought it would be fun to share her current ambitious design!

We're looking at making a change to Stance drop rates that doesn't involve flooding the drop tables with new loot rotations. Although these changes are still in discussion, a few examples of what we have in mind are:

Many improvements to the Focus System are currently being developed, and while these changes are still Work-in-Progress at this time the features we're currently focusing on implementing are:

We haven't forgotten about Umbra, and we know that there's a lot of anticipation for him to be released in the wild. We promise to give more information about Umbra when the time is right but for now we would prefer to release Excalibur Umbra in a way that properly explains what makes this type of Warframe so special.

We have a lot of exciting changes to Warframe's lighting that will really help bring to life all of our existing locations, in addition to fixing a few bad textures. Because of how extensive these changes are each tileset will need to be updated individually, so expect a slow rollout of this update of the course of a few hotfixes.

A new set of Corpus-themed armor and special two-part gun are currently being designed. Here's a quick peek at the goods! 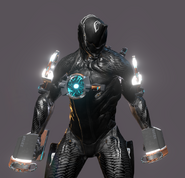 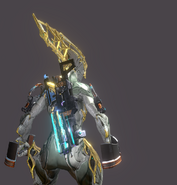 Our healer Archwing is currently in development, and will likely release alongside some new Archwing goodies. We are committed to continuing our expansion of Archwing content, but our main priority is making fixes and adjustments to existing game modes and mechanics rather than adding anything new to the mix.

Retrieved from "https://warframe.fandom.com/wiki/Devstream_67?oldid=1234004"
Community content is available under CC-BY-SA unless otherwise noted.