Devstream 60 may be behind us, but the exciting reveals will live on in our hearts forever. Each of our bi-weekly livestreams with the development team is filled with insight as to the past, present, and future of Warframe. Last week Archwing improvements, some exciting information on Arcanes, and the upcoming Brawler Warframe were all featured with some pretty incredible in-game footage.

If you missed any of the action and want to catch it live be sure to check out all the excitement on our YouTube channel here. In the meantime, here's what you may have missed:

Going to be at New York Comic Con? So will we! If you plan on attending then why not join us at our Developer & Community Panel?

You can find all of the details for our event here

Can't make the panel but still want to hang out with the team? Apply here to join our After Party at McGettigans.

As a reminder, a limited amount of invites will be sent out, so send us your information ASAP if you'd like to guarantee a spot!

Update 17.5 is going to feature a lot of new Archwing content, but with all the feedback we've received on Archwing since launch it also makes a perfect time to give our space-combat game mode a mechanical overhaul. Here's a quick list of some of the improvements we have in mind that will go live in U17.5.

Mesa’s Peacemaker is being adjusted to be narrowed down to a cone of view instead of a full 360 auto-hit. As players adjust the cone they’ll auto-hit enemies within its range, dealing more damage over time as the cone decreases in size. This rework will provide Mesa with a blend of precision-based high damage that should feel far more rewarding to use.

The Rhino Temple Guard skins are coming along nicely! Check out this upcoming weapon skin here: 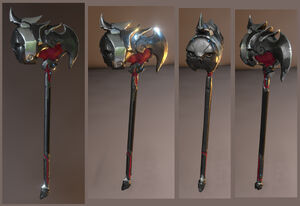 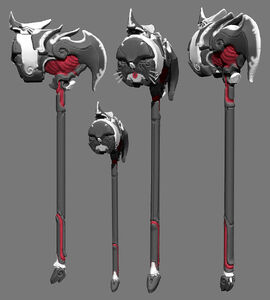 DE has been analyzing what Mods are used, overused, are fun to use, how weapons level, and most importantly how enemy scaling fits into influencing player builds. It’s a lot to cover, but they’ll be tackling the changes to weapon DPS carefully.

Retrieved from "https://warframe.fandom.com/wiki/Devstream_60?oldid=1490856"
Community content is available under CC-BY-SA unless otherwise noted.