Issun135: Progress on new J3 Golem? Tom: It's moving along nicely. A lot of different components, some of which we're gonna show today. A lot of enemies are in concepting, some are being modeled. I'm prototyping the behaviors and attacks, then once it's rigged Scott will do the animation and Daniel and Paul will do the behaviors. Rebecca: I know you guys have been reworking all the bosses, so is he next? Dan: Yeah, from what I understand. When we launched, our bosses were just big enemies with lots of health, shields, and an ability or two. Now we've had time to go back in terms of arts and design and create more fleshed out characters. Tom: We have a progression of the Golem here over time, through a few pieces of concept art. From initial to final concept, the Golem underwent a huge change. We even have some renders of the final model. The actual Golem is part Corpus ship, and partially just infested weirdness. It should be coming within the next 6 months. Scott: To give a sense of scale, the Tenno will be about 1/3 of the height. Q: When are we getting more colossal-sized bosses? Scott: We'd love to make more. There are some concerns, like having enough space for it to move around, which means having sort of arena. Dan: We want it to be that epic moment, and feel rewarded for reaching the bosses and beating them Q: Do you have any ideas on how he will be implemented, like how the player will reach him? Tom: We don't deal with that as much as the Event guys. We're pretty excited for this guy; he's going to be unique, different, huge and badass. Q: Enemies of the Tenno: Juggernaut, Manic Grineer, RIOT Moa Dan: It's great to see such a response from the community. We're always coming up with ideas, and it's always interesting to see suggestions that are similar to things we already made. Rebecca: I think that was the case with the Grineer Beast Master? Paul: He's almost ready. He's going to spawn in with a Kubrow buddy, and he'll use a sort of glaive weapon, and try to steal your rifle or pistol to use against you. You have to kill him to get your weapon back. It's kind of a riff on the capture target, where you can give them your weapon. Dan: We've got the feral Kubrows all over Earth, and the Grineers have found a way to domesticate them, much like the Tenno. Tom: [The winning submissions] are all really cool enemies, and they fit in line with our design ideals, which involves making enemies that do more than just shoot you. We want more enemies that engage the players or their teammates in interesting ways. The Juggernaut is a good example, with some good ranged attacks that will definitely mix things up in combat. It'd be cool if they were a bit tougher, a bit more rare... Dan: Kind of like a mini-boss. You're not going to meet hordes of these guys, but you'll encounter a couple during the mission and change up the fight? Fabpsi: What future "mini bosses" (like stalker, harvey, g3) can we expect? And furthermore, will there be some kind of special boss/stronger enemies if you survive long enough in a defense/survival mission? Dan: Yes. We'd love to make more, but it's just a matter of time management. We'll start with these community designs and make them more special than the occasional grunt. That's a good place for them. Tom: The Juggernaut is so big, that we can't just put him down everywhere. He's going to be too large for some spaces, Rebecca: Will the infested Corpus ships be permanent places on the star chart? Tom: I think they will, yeah. It should be going into Eris, which is where the Golem is going. Rebecca: Phorid is currently the boss there, will he still be around? Tom: He should be. Scott sent us some ideas that are crazy. Scott: Not a charger anymore. Blank slate. Apsinion: since orokin derelict have a boss how about a boss for the orokin towers? Tom: Good idea. The more, the better. We're currently working through the existing bosseScott: Phorid, Ambulas, Tyl Regor, Lephantis. We have a design for Tyl Regor ready to go, which we can show now. We kind of designed him around using Melee 2.0, and made him as ninja-like as possible. He's really melee-based using a sword and board, as well as detachable forearms, so he also uses a set of power gauntlets. Tennos will have to find a way to get him into a state to damage him using Melee 2.0. We'll be adding in new bosses occasionally as we revise the old ones.

Q: Update 14? What is first on the menu. Tom: I think the drone and one of the MOAs are first on the menu. Q: Boss lore? Tom: I think so. Ryan does such a great job, and he loves writing entries for our new designs. Q: Modding Kubrows? All: In a way, there will definitely be customization for the Kubrow. We will see how customizable we can make them! Q: More infested Grineer? Scott: I think a number of the current infested are Crewman, but the Charger is a Grineer if you look closely. Ultimately will make more if we have time! Q: Will we get a boss back on earth/boss combinations? Tom: A double boss would be a good way to get a boss on Earth, it’s safe to say we will have a boss back on earth. Dan: With bosses, we always want to have them be these difficult moments, so we can't put them in everywhere. Q: Lotus AI? Dan: I touched on this in the design council... We actually have two layers of AI, which includes the director AI, which overlooks the entire level. So we could do something with that for Lotus. It'd be great to get more lines and dialogue options that take into consideration the player’s history and familiarity with missions for more diversity. 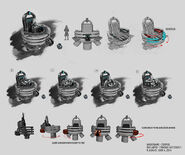 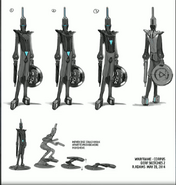 Derf Anyo Concept Art 2
Add a photo to this gallery
Retrieved from "https://warframe.fandom.com/wiki/Devstream_30?oldid=1490933"
Community content is available under CC-BY-SA unless otherwise noted.