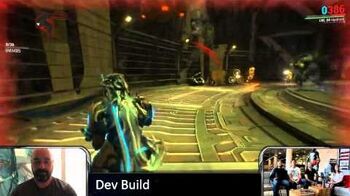 On The Couch[edit | edit source]

From Right to Left:

And of course the awesome Livestream crew, Megan, and everyone at DE!

Observatory may have HUB functionality later down the line ("Update 38 in 2016!")

Orokin Lab: KUBROW! "How you clan or alliance will participate in the new BADLANDS mode." Solar Rail requirements CANNOT scale with small clans, must Alliance

Solar Rails can be repaired with dojo resources

Badlands missions have better rewards, "might be some missed factions"

Level of Solar Rail conflicts based on the planet's level

PvE against a clan's Orokin Tower; NOT PVP. No attacking the clan members themselves

Stream delay was because uploading DEV BUILD. Nothing is finalized!

"We should make our subreddit happy and..." -Rebecca

"People were drawing pirate hats on the subreddit" -Steve

Pirate theme gave it some depth

So many dangly bits!

Tidal Surge - Turn into a tidal wave, boost forward, pushes AI down and together with DoT. Crowd control

Undertow - Craziest power: turn into a puddle! Cannot be detected by AI as puddle. If enemy walks over puddle, you can absorb them into the puddle and do DoT!

Deep Dark Sea - Tentacles! RELEASE THE KRAKEN! Grab and fling AI once deployed from the ground

Stance Mods go into new melee weapon Stance Slots. "Default stance" (no stance mod) has no combos but can do everything else. Combos can be unlocked with Stances.

All melee weapons will be useful! "Did Pluto with just the Skana" -Scott

Melee Channel: Fire button becomes "Channeling" to power up and create openings for finishers. Channeling while blocking. Mods to affect this; lifesteal while channel, status chance/fire rate increase, damage increase. Every hit with channeling is 5 Energy by default

Even without the new stances or mods, there's still lots of depth to melee

"We can't wait to see what combos you guys can reach!" -Steve

We tested this on both consoles; works great with controllers!

There's so much to learn once Melee 2.0 hits, take the time to learn it!

Throwing weapons: Hold to throw still there, but there will be combos as well (SO COOL)

We hope you see our ambition with this Update, and can understand why it was delayed. Do not hate on the Marketing department or anyone else at DE; we were all disappointed to delay the Update, but we want to put quality first. Thank you for your understanding.

Compressing tech to improve load times in Dev Builds. All player patches and builds are pre-processed so you don't have to! Anniversary stuff for the PS4?

Yes! U13 is "banging at the door" to get certified

We will address that after U13 is released

How will we obtain Hydroid?

Question forgotten for the question below

Vay Hek was missing from the Dev Build?

"Did you think it would be that easy?" You'll have to find him! The Hunt Begins U13!

Don't forget to vote for Warframe at the MMOBomb F2P Showdown Finals!

Retrieved from "https://warframe.fandom.com/wiki/Devstream_26?oldid=960035"
Community content is available under CC-BY-SA unless otherwise noted.