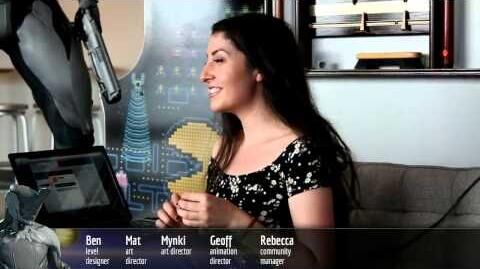 The developers at Digital Extremes have done another installment of their Livestream Developer Q&A ([1]).

Rebecca: Melee 2.0, what to expect and what does it change?

Geoff: It’s definitely going to be coming. We’re adding mobility to equipping your melee and being able to run around, buffing the damage to melee in that state so it’s more effective, blocking will be buffed to block incoming bullets, adding a parrying system so you can time counter enemy attacks which trigger finishers.

Geoff: We have to do a finisher for each stance, for the most part that’s it. We’re also having transition attacks like adding animations after jumping/sliding that will let the flow of melee feel better. These will be forks in the road for players to choose. It’s a foundation for a bigger house to build.

Geoff: Loki and Ash will not lose their melee stats.

Rebecca: How does Melee 2.0 affect Art?

Mynki: It could influence having more melee focused enemies, and will impact the melee weapon design to show what other possibilities there are with it.

Rebecca: It feels like the bar has been raised for Frames since Oberon. What’s the new Warframe look like?

Mynki: It wasn’t meant to be a bigger rising of the bar; I’m always trying to improve though. It’s a sign of things to come because they’ll keep building. The next frame is an air-based Warframe. She’s turning out to be the most detailed Warframe so far. Her model is very close to done but the textures are going a bit higher.

Rebecca: What are the plans with Forest tileset?

Mat: We’re pretty happy with how the Forest rooms turned out. We intend to release that with Update 12. It will have a full set of Earth rooms with addition to the Event tileset.

Ben: We’re expanding into the other game modes that exist already as well. We’re still going to be featuring plant scanning, and the day night cycle.

Rebecca: Can we have more epic Treasure rooms?

Mat: It’s not necessarily concluded in this tile set but we’ll find a home for that stuff.

Geoff: There is stuff in the works for Treasure rooms.

Mat: Long term goal is to have sets specific to each area of the star-chart. After the Forest will be the Grineer Shipyards that will be making the ships that you see flying through space.

Ben: A lot of the concepts are Grineer dominant and they (Grineer) don’t take care of the environment. So you’ll see fallen structures, etc. It’s going to be fun to find game spaces we can use.

Rebecca: We have the Dojo system, any comments on the concept art with the dojo?

Mat: We have long term goals right now, with the dojo there is a bunch of content that is waiting to be deployed, it’s a lot of under the hood stuff to make functional. More props, place able items related to rooms, new rooms, etc. Trophy room is one of those things waiting for finishing touches.

Mat: The elevators are currently being worked on. That’s one piece that kind of slipped through the cracks. Anything new we create for the Dojo will have that Tenno specific style.

Rebecca: We had the rework of the Gram, is there anything else you want to touch up?

Mynki: The reasoning behind the Gram is the same model was being reused on a diff weapon type, so we we’re trying to make it unique. I like the existing Warframe art, I won’t be revisiting them because I don’t think their broken.

Geoff: Cloth physics will help with a lot of those little Warframe problems like Trinity’s skirt.

Ben: The corpus interactive level set was the last corpus set we touched on.

Mat: Gas city was a big push for Corpus as well. We’re in a Grineer track right now but we’ll be breaking out of it. We definitely look at ideas that we’ve pitched around when we’re looking for new art.

Rebecca: Infested ships were teased last Devstream, any word on a new tileset?

Mat: Definitely exploring Infested tile set, we’re in the early stages but looking to develop it further. We’ve done some Infested ship concepts, but the big challenge now is how do we apply to existing environments.

Rebecca: You said no dancing, but how about emotes?

Geoff: Yes, we’re playing with different actions. People want to kneel so that’s absolutely coming. We’re still figuring this out and how to communicate them.

Rebecca: With new re-done boss fights they get new rooms. Any idea which boss is next?

Ben: Yes Vay Hek will get his own arena.

Rebecca: How about maps/individual tilesets for stealth?

Ben: I’m interested in having areas in the Forest that would increase your stealthy-ness. Something we could definitely explore. The Forest won’t be getting an ‘alarm system’.

Geoff: We’ve done some stealthy stuff for AI but it’s a big system. Something we have to dedicate time to but work has been put in on it.

Rebecca: Can we tease the next Prime?

Mynki: Can’t tease, I think we want to keep it mysterious. I can say that they will be the least humanoid of the Factions. The progress has started on them.

Rebecca: Will they have their own planet?

Mynki: We’re talking about a new planet, but still allowing for them to come into other areas.

Mat: Kubrow is coming with Earth. We want to add more wildlife.

Mynki: I was thinking we needed a bird creature; none of it is natural though. All the specific details would be genetically engineered. They’ll be a little bit warped compared to normal wildlife. But the longer they’ve gone wild their able to adapt to their surroundings. It’s a threatening bird with a Dodo head.

Mynki: I’m working on a new Grineer Trooper type; I don’t want to promise anything but it’ll be cool. One of the main ideas is it’s more a laborer type class, still tough from working in shipyards.

The Next Big Thing

Rebecca: What exactly do you have in store for the next big thing?

Mat: Environment wise is the Forest set, and bits of pieces here and there.

Ben: Lots of prototypes for the forest set. Maybe not next update stuff.

Rebecca: What you want to do creatively?

Rebecca: What is an idea for a level you haven’t seen? Aquatic?

Rebecca: Players have been asking about Parkour improvements for a while.

Geoff: We can improve it for sure. We had a big grey empty room that you could run up the wall and steer, but now there are obstacles in the wall/ tighter areas. That’s why it’s very sticky. But there is a middle ground we can reach.

Ben: We have to consider old rooms and new rooms.

Rebecca: We once mentioned that female Warframes would get their own base animations, any progress?

Geoff: We talked about that, and started on that 6 months ago but it fell of the priority plate. We’ll get back to it eventually.

Retrieved from "https://warframe.fandom.com/wiki/Devstream_21?oldid=1328699"
Community content is available under CC-BY-SA unless otherwise noted.