In Devstream 153, we looked both to the past and the future for our Warframe updates -- reflecting and iterating on Update 29.10, and teasing what is to come in the Call of the Tempestarii Quest!

If you want to catch all of the details and shenanigans, including everything covered in our Q&A section, be sure to catch the full stream on our YouTube channel. For those looking for the recap, read on below! 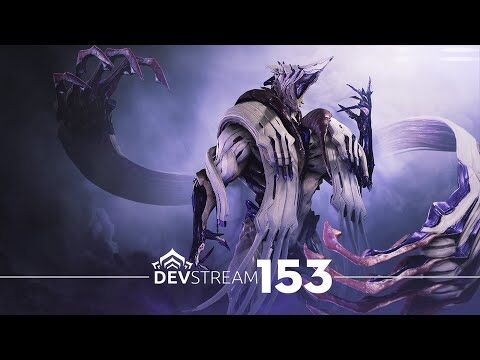 Warframe is celebrating 8 years! Join in the festivities with the return of our Dex anniversary items via Alerts. To ring in 8 incredible years, players who log in during our Anniversary celebrations will also receive the Dex Rhino Skin on login! More details to come.

UPDATE 30: CALL OF THE TEMPESTARII[]

We’ve talked at length about Sevagoth, but we still have more to share prior to his release in April 2021! First of all, here is a look at his alt helmet:

Secondly, we have his Prex Card to showcase! In this update, we are trying a new acquisition for this card: in lieu of investing narrative work into a Leverian, we are making it acquirable from his Quest itself!

The Call of the Tempestarii will be a shorter quest with a mysterious vessel. This will be one of our first lore-heavy quests featuring Railjack -- in it, we will introduce you to Vala:

Mirage’s Deluxe skin is coming along nicely, to the point where it should be ready to release with Update 30! We might also be able to squeeze in a Deluxe Animation set as well, but no promises.

If you missed it, this Deluxe skin started as a community concept by Cleo Naturin!

The Devs chatted about a few popular feedback notes from our recent PC update. Iteration is always an ongoing, complicated process, so here’s a look at some of our internal conversations and plans for the future.

Scott explained that the requirements for all squadmates to enter the “on-ground” portion of the mission was tied to AI spawning limitations. With that said, we are very much aware of the requests for more mission diversity in these nodes, and we are working to include more core Warframe game types into the Railjack ecosystem!

Reb specifically mentioned Assassination is something you can expect with Corpus Liches.

We can confirm that Liches being eligible for “On-Call” status is in the works!

Another key feedback item about Liches was the ability to give them roles other than Defender. Geoff said the animation team is doing work to support any extra responsibilities you want to give them -- because Liches are so large, they require some custom tweaks before we can teach them any new skills.

Rewards is an ongoing discussion for Warframe as a whole, but it definitely is relevant for Railjack as well! Since our roll-out of “The New Railjack” is still ongoing, we hope to add more interesting rewards with the introduction of Void Storms, and Corpus Liches as well.

We changed Battle Mods with Update 29.10, and usage stats show how this impacted player selection following this update. Looking at the stats below, the team mentioned it is perhaps a sign that some of the other Battle Mods need a tweak to bring them closer to the level of Seeker Volley.

Gunnery Rank 10 has received a lot of feedback for having a downside to its auto-aim. There’s always room to re-evaluate, but currently we feel like the perk of Rank 9 helps to off-set the extra heat accretion. With that said, we are open to revisiting this down the road!

Scott also mentioned the option of allowing per-station Weapon selection, instead of having the Dorsal and Ventral turrets share the same equipment.

Players have noticed that since the Plexus has entered the Affinity equation when Piloting or Gunning, there is a new way Affinity is distributed. While Squad kills are still shared, personal kills are absorbed by the Plexus. This is currently not something we are looking at changing.

The ability to choose to be host of your Railjack missions is no longer available -- hosting and matchmaking in general is a complicated system and at this time we do not have concrete details on whether that option is planned to return.

We had feedback on making the boss fight in the Deadlock Protocol a little less difficult. That change went out in Update 29.10, and we saw marked results!

Thanks for reading! Have a lovely weekend, Tenno.

We will be at the usual place (twitch.tv/warframe) with the Devstream crew of Steve, Sheldon, Geoff, Scott and I.

Our main focus is another Q&A and of course, a discussion on all things Corpus Proxima & The New Railjack.

- 8 Year Anniversary Plans and what to expect!
- Call of the Tempestarii Launch Window
And… Drumroll …
- Xbox Series X/S Launch Window!

Don’t miss it - watch to earn a Twitch Drop of a Rush Repair Drone, and look forward to 2 Gift of the Lotus Alerts after the stream!

See you at 2 p.m ET on at twitch.tv/warframe (Or, if you're on Switch, check us out on Youtube: https://youtube.com/playwarframe)

This Thread will lock at 10 a.m ET on Friday, March 26th - get your questions in here!