We’re back with what possibly is the last stream before TennoCon 2019. The team has come with their hands full of reveals and updates before we prepare for our radio silence. You can learn more about the 41st Warframe, our plans for a Wukong rework, a peek at some sentient tilesets in the works, either by reading our overview below, or watching the full stream!

Our 41st Warframe is ready to be unveiled. We won’t be sharing news about his abilities, but they are rooted in mach power and speed. Here’s what he looks like in-arsenal, featuring a curious "[PH] Redline mode" – wonder what that could mean.

The team couldn’t resist, and showed a preview of his first ability. This is very much a work in progress with no balancing passes done, so it is very subject to change:

Here’s a preview of his agile animation:

And preview of his noble animation:

You can also check out his concept art here.

The hi-poly is currently being worked on – here’s a preview!

We’ve previously mentioned our plans to rework Wukong, and now we officially have something to share! Our current plans are to release this with the melee combo rework.

Speaking of melee, here’s a look at what Geoff has called “Hero moment” finishers. These would be rare and occur only at the end of the fight on a specific enemy who will have extended drops if you decide to finish them in this way. This is not the new look of all finishers, but an added flair in-mission tied to a rare enemy type with this functionality.

And some actual in-game tours of the tile.

Are you ready to see it?

That’s all we have this week! Have a good weekend, Tenno! 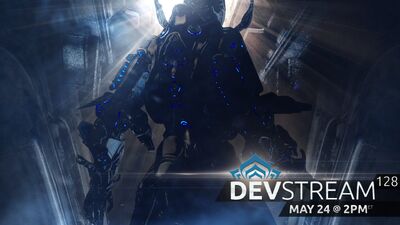 What: It's possibly our last Devstream until TennoCon. A perfect time to reveal a new Warframe: the 41st! We've got lots of work to do for the players to make that extremely official Whiteboard Roadmap happen. Our goal this stream is to set the stage for the remainder of 2019 and give you - a Warframe player of new or old - a vision of what to expect with the items that remain (and more)!

Twitch Drop: Tune in to find out what you can snag for watching our Devstream!

Retrieved from "https://warframe.fandom.com/wiki/Devstream_128?oldid=1968879"
Community content is available under CC-BY-SA unless otherwise noted.