We’re back with Devstream 123 and boy do we have a lot to share! In this overview, get news on the next Warframe’s abilities, some info about Railjack Drydocks in your Dojo, take a look at the Wisp Warframe, get a peek at the Gas City Remaster and so much more!

As usual, if you have the time, we recommend watching the full Devstream for all the nitty gritty details, or just read about the highlights in our recap below:

Warframe’s 6th Anniversary is fast approaching! To kick off the celebrations, get ready to declare war: a Weekend War.

Happening over three weekends starting in February, the 6th Anniversary Weekend War Event is made up of a trio of Gift of the Lotus Alerts, with an objective of killing as many of a certain enemy as you can. Take out enough enemies before time is up and you’ll unlock a Bonus Weekend in March for the whole community! Learn more here.

It’s time to get a look at the abilities of our next Warframe: Hildryn!

She’s different from other Warframes in that her shield pool doubles as her energy pool. Energy pickups will still work – they will increase this pool, AND will remove her shield recharge delay. One final fun thing, her dash will summon small shields. But let’s get on to the abilities themselves.

Passive: Shield Gating on her base shields, and her on overshields.

First Ability – Balefire: Summons her Balefire Exalted Weapon, a launcher that charges up and deals an energy blast! 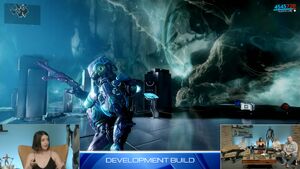 Second Ability – Shield Pillage: Sends out a wave that pulses out, and rushes back to Hildryn, stealing some enemy shields and armor as is passes over them. Any allies it passes over as it returns to Hildryn are cleansed of Status Effects, including Hildryn herself! Finally, you can recast the ability to return the wave to you sooner.

Third Ability - Haven: Enemies in range will take damage based on the shields you drain from them. This ability also recharge your Ally’s shields and give them bonus shields in range.

Here’s a look at her Second and Third abilities, and her dash! 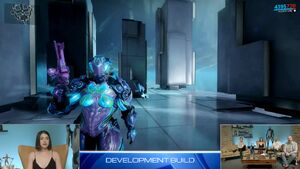 Fourth Ability – Aegis Storm: You can fly up and down using your spacebar and shift. Enemies below you are caught in a CC pillar of energy. The higher up you go, the more damage done to enemies in these pillars, but the smaller the area of effect becomes! You can still use abilities in this mode (pending her Shield Pillage) for extra synergy. 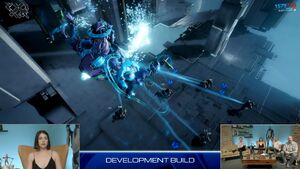 She’s also coming with her own Syandana, and Archwing Weapon, which can be seen here.

And don’t forget her alt helmet: 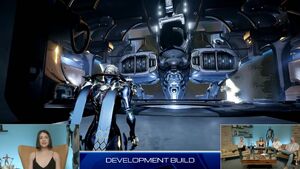 You will be able to build your very own Railjack Drydock in your Dojo! This is where customization happens, as well as a bit of the maintenance and upgrading.

Your own ship will show up in this dock when you enter.

Here’s a preview of another Warframe: Wisp! We don’t have her abilities ready to share, but here’s a look at her, her alt helmet, and her animations in-game. 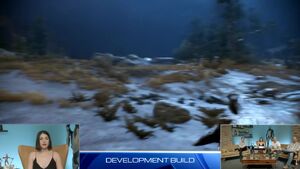 She’s the second Warframe with her own floating idle. The animation team is experimenting with creating her own custom sprinting animation, as well as a potential custom movement set. We are still planning on doing work on her cloth details, so she’s not quite finished just yet.

New cosmetics are coming: Ephemera! These will be acquired by Tenno able to complete specific challenges and will offer fancy effects on your Warframe, like smoke on your body, or fancy foot trails. 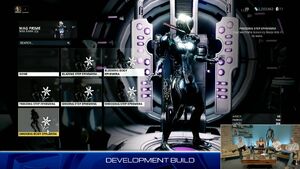 We’ve shown off the Gas City remaster quite a bit, but the tile is coming along nicely. As part of our remasters, we’re not just looking to update the art, we’re also aiming to add new gameplay! Here’s one example, with some new laser traps designed to reward players for completing the challenge successfully, instead of punishing them with knockback/etc. for failing:

PLEASE NOTE, this is in a level designer room, so you’ll have to use your imagination! 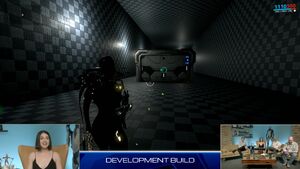 You can take a tour through a familiar tile at this Twitch Timestamp. If you’re a Tenno with a less powerful computer, don’t sweat – the remaster is just using new tech and new materials to bring it up to the level of Orb Vallis and more.

Finally, a new group of Set Mods will be available from foes in this tile remaster:

All stats are shown at base rank and are subject to change.

Other Stuff in Development[] 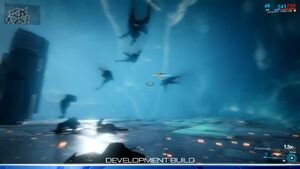 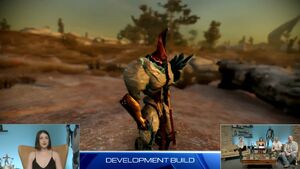 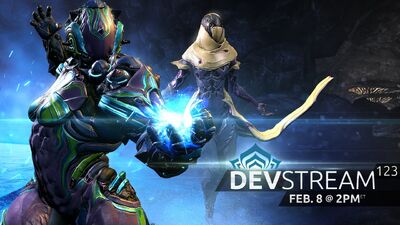 Who: Rebecca is joined by the usual suspects!

What: Come see Hildryn in action with a first look at Abilities, plus a first look at ‘Wisp’ in game. We’ll have questions to answer, gameplay to go over, and more! Come see what’s in Development and learn about how Warframe gets made!

Prizes? Why yes, we will be giving away 3 x 1000 Platinum Prizes during the Livestream as well as a Mesa Prime Access Pack AND a Prime Vault pack!

Twitch Drop: Join us to get your very own Kavat Starter Kit!