If you started your St. Paddy’s celebrations a day early and were too busy with your green-coloured liquids to watch this week’s Devstream – worry not! As usual, we have our overview ready to go.

Learn more about the Endless Kuva plans, Void Onslaught, and more in the full episode on YouTube (in spoiler), or check out the “too-long-didn’t-watch” version below.

We’re celebrating Warframe’s 5 year anniversary! Log in before March 28 at 2 p.m. ET to get your hands on the Dex items, including the new Excalibur Dex Skin! Full details, including some awesome stats, can be found here.  As always, the Gift of the Lotus Alert is live for 24 hours on all platforms after stream! TennoCon tickets are over half sold out! Come hang out with the Devs in London, Ontario for a full day of Warframe on July 7, 2018: warframe.com/tennocon

While Sheldon originally promised a Dev Workshop, we decided that our plans for Endless Kuva deserved a showcase on our Devstream instead! These endless missions will occur on Survival on the Fortress itself! Enemies will drop a pickup, the Kuva Filter, which once inserted into a life support tower will turn it into a Kuva Tower (name placeholder). It will no longer restore life support – instead, it will filter out Kuva!

You’ll have to defend this tower for X amount of time from enemies who are very unhappy that you’ll be taking their Kuva. Once the timer on the tower runs out, the filtered Kuva is yours! 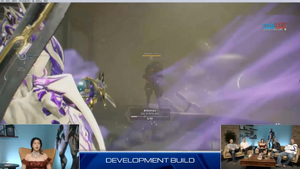 Zephyr Prime Access is launching on March 20th, so here’s a quick peek at our bird friend in the Arsenal (including the TennoCon 2018 armor!): 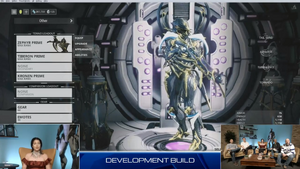 Scott still wants to look at her kit further as there are a few lingering issues that we’d like to evolve. He specifically mentioned how her hover functions in closed environments, as well as the speed of her number 2.

As mentioned in a previous stream, this little guy turns into a saw frisbee – fun! 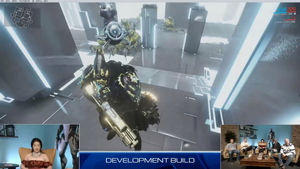 These big boys turn invisible until you deal a surprising significant amount of damage them to them. 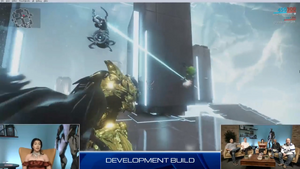 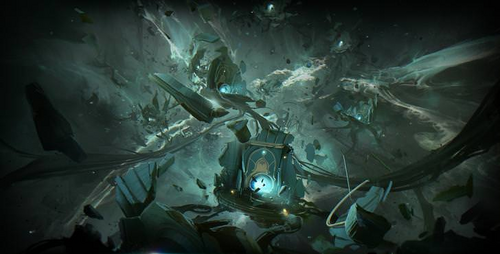 Some of you might have seen the accidental appearance of a new mission type on the PC leaderboards list: [PH]Void Onslaught. A few savvy Tenno connected the dots to the new “Dark Sector but not actually anymore” mode we’ve been working on.

For those unaware, this is a dungeon-like time-limited mode where you try to clear as many sectors and get as high of a score as you can within a set time limit. Each sector will have its own different mission condition and will be procedurally generated.

As Scott likes to call it, our plans are kind of like the kitchen sink of Warframe – platter of everything at warp speed.

For those who have kept up with previous Devstreams, you will no longer have to stand at waypoints to clear sectors. Instead, you pick up key fragments that are dropped via combat. Other small tidbits mentioned:

Potential Focus bonuses. Score goes up as you kill enemies. Weekly leaderboards with rewards. Here it is in action: 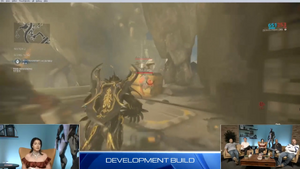 We previewed this on Prime Time 200, but for those of you who missed it: 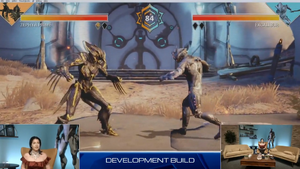 This game started off as a concept by a community member, Loco Crazy. We loved it so much we had to make it a reality! Hopefully Tenno can see this in-game sometime in the future.

Since her decoupling from the IPS system, we have been revisiting Khora’s kit! Scott has rough abilities laid out for her, but we aren’t quite ready to share! We’ll hopefully have something to show soon.

Those of you who frequent Neo Fissures are probably very familiar with the Ur-AH-nus Defense tile. Variety is the spice of life so we’re adding a tile variant for Uranus Defense missions, a preview of which you can see below: 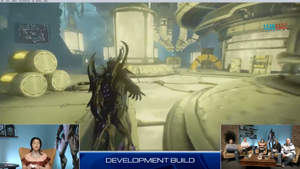 PhysX is no longer being supported, so we’re making a new GPU-based particle system that will work on all on all platforms! We’ll be phasing out PhysX particles and adding our own moving into the future, which you can either turn on or off depending on the strength of your GPU (or overall love for particles).

This new system will also interact with your Warframe as well! 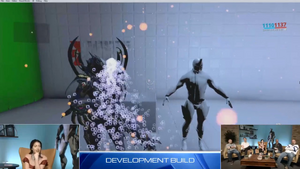 Those of you who watched Devstream 100 might remember the Daily Tribute changes we discussed, namely the introduction of “Tracks”. These would allow players to pick what item would be unlocked at their next login milestone. We are still hoping to implement this when our team has time!

What: Continuing from Devstream #107, let’s take some time this Devstream to give status Updates on “the-many-things-that-we’ve-shown-but-not-released (TMTTWSBNR for short). We’ll also be taking a first look at the recently announced Zephyr Prime, discussing Kuva, and more!

Retrieved from "https://warframe.fandom.com/wiki/Devstream_108?oldid=1723618"
Community content is available under CC-BY-SA unless otherwise noted.