If you’re hoping to avoid the screech of fire alarms and learn more about Warframe in the process? Oh boy, are you in luck! The first Devstream of 2018 was cut a little short by blaring sirens, but that has given us the opportunity to make as many fire/lit/Ember/Bursa jokes as we see fit!

Pick your favourite and keep on reading for burn-free highlights from this week’s stream. If you want to experience the full ride, be sure to watch this episode on our YouTube channel above.

It’s time to put those Lakitu cloud-stealing skills to use! You will be able to ride your very own Dargyns on the Plains of Eidolon: 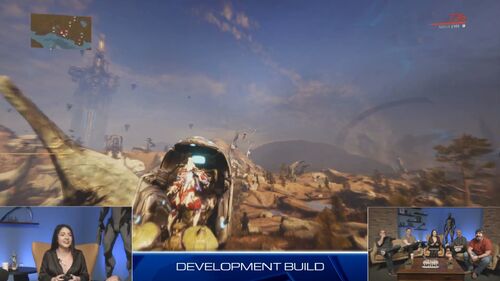 These will be grounded on the Plains and you can either use your ninja skills to steal them or clear out the grineer around them and take their ride. When you decide to exit, the Darygn will fall to the ground so you can re-board it if you choose. The footage above is still very work-in-progress!

Here’s a look at a work-in-progress model of Mesa’s Deluxe Skin. With it comes musket-inspired pistols! 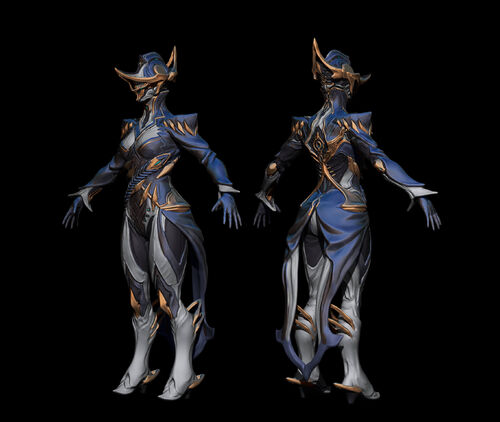 We revealed the coming two-handed Katana in a previous Devstream, but here’s some more animations to tease you all with:

The first batch of TennoGen Round 11 pieces will be released on PC sometime next week (the week of January 15). For those not in the know, with over 30 submissions accepted for this Round, we have split it into 3 and will drop them over the course of a month. The subsequent batches are currently planned to go out later this month and in early February.

These will also be coming to consoles at a later date.

For a look at what this round contains, you can check out our official thread here: https://forums.warframe.com/topic/886932-tennogen-round-11-accepted-submissions/

Four new Warframe augments are coming for Titania, Harrow, Nidus, and Equinox. It appears that the world is not yet ready to learn about these yet, since the stream was cut short before this segment could be finished. These will be shown off in more detail at another time, but Reb managed to show off a bit of the Nidus Augment before our mandatory evacuation:

This Augment is for his Larva ability and will cause it to explode upon reactivation for AOE damage and guaranteed procs.

After posting our Dev Workshop about the Impact/Puncture/Slash changes and reading all of the excellent feedback you provided us on it, we are decoupling Khora from this system while we rethink its goals and objectives.

Khora will be redesigned slightly and released when possible. As for Damage 2.5, what we have planned is different from what we originally outlined in the workshop. Stay tuned for more details when we have them.

At the end of last year, we launched a survey to learn about our community’s opinions about our largest update ever: The Plains of Eidolon! We’ve compiled responses to some of the bigger picture questions we asked of our Tenno. Look them over and see if you agree

Those of you who have completed Warframe’s main quest line should be familiar with the morality system, and the lack of content relating to it following its inclusion into game. Steve spoke about it briefly and explained that we simply got distracted and haven’t implemented it as much as we would have liked. In its current form, we think that it can be improved to be more immediate (relating to the players in-the-moment experience) and have consequences. 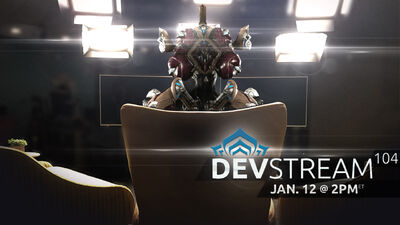 Who: The crew is back! Join Rebecca, Steve, Scott, Geoff, and Sheldon on the NEW couch!

What: We have a new streaming space! We’re going to break it in with our first Devstream of 2018! We are well rested from some overdue holiday time off, and are bringing you updates on the plans for Warframe as it enters it’s fifth year! We’ll be having plenty of conversations about Warframe’s progression and direction, and we’ll be answering your questions!

Prizes? We will be starting the year off with lots of prizes, including another Twitch Drop for the Stream!

Retrieved from "https://warframe.fandom.com/wiki/Devstream_104?oldid=1767310"
Community content is available under CC-BY-SA unless otherwise noted.