Did you miss your chance to spam !plat in our Twitch Chat for Devstream 100? While we can’t replicate that experience, we can tell you what was talked about and revealed for this milestone stream!

You can see all of the dirty details (including one too many knob jokes) in the full 2-hour special, or simply read our overview above:

The Plains of Eidolon update for Console will hopefully be sent to cert tonight! 3 PC Alerts are live for 100 Hours after the stream: Orokin Catalyst Alert, Orokin Reactor Alert, Rifle Riven Alert! Consoles have the 24 Hour GOTL Alert live, and will receive the other 3 Alerts once Cert is done.

Here’s Khora, one of the Warframes we have been working on behind the scenes: 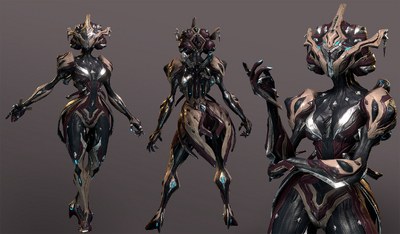 With her, you will be able to summon her own custom Kavat (even if you already have a Kavat equipped – you are one step closer to full Kavat-lady status) and an exalted Whip!

She will have the ability to change her damage output between slash/impact/puncture, and her appearance will change to reflect it.

Here is a look at early progress for the next Eidolon, with banana Excalibur for scale! This fellow will stomp around on his blade-like arms, and possibly fly around the Landscape for you to pursue. 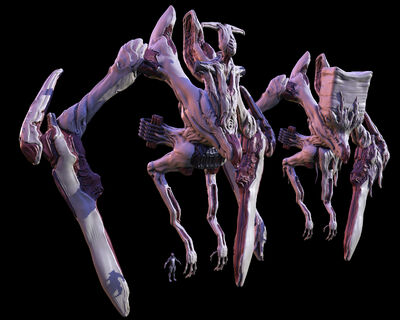 Geoff mentioned bringing out variants for the existing Teralyst as well – what will its arm be next?!

We are making changes to the Daily Tribute System with the introduction of “Tracks”. After the initial 50 days of logins, you will be given the option to choose the track for your next milestone, taken from the existing milestone rewards (Zenistar, Primed Shred, etc.). After another 50 days (number still TBD), you will unlock the item and pick your next Track.

THE METEOR HAS LANDED! Have you ventured onto the Plains to investigate it yet?

Next week will come a new Operation tied to the meteor, with new and returning rewards. Here’s a look at the new infested Zaws that you will be able to earn from this event:

Full album of in-progress pics can be found here: https://imgur.com/a/tGAXF

The Snipetron will also be making a comeback with this Operation.

We are changing how you receive rewards from Bounties. Currently you receive one item upon its completion, but now you will earn a reward upon the success of each stage.

The first few stages will pull rewards from the common and uncommon pool, and the last two stages pull from the complete drop table.

Since Focus 2.0 went out, we have heard a lot of feedback about how it feels to unlock nodes and gain Focus points, and it is not what we wanted to hear. So, we’re smashing the system again. You will be given the opportunity to respec your schools once again.

Here’s a look at what’s changing:

We will be removing tree-specific Focus capacity and moving to one Universal capacity for all schools. This way it’ll be easier to move between Schools, like the Way-Bound passives already offer.

The daily Focus Point cap is also being removed and replaced with a curve. When you first start playing, you will receive a boost of Focus experience, with less being received the more that you farm. The point on the curve at which you receive diminishing returns will probably mirror the existing cap now. Instead of receiving no Focus points at all after this level, you’ll simply get less of them.

We’re experimenting with the boosted Focus gain in a few ways as well:

The Focus System is here to address the “what’s beyond 30?” question – that is, what happens to the affinity you earn after levelling up all your gear? These changes are meant to benefit both players who passively gain Affinity in their journey in the Star Chart, as well as those who actively work towards meeting their daily cap.

They spawn out of body bags buried in the ground.

Using the explosives tied to their arms, they launch themselves at you.

They terrify me. Send help.

Your dreams of wielding the Tessaiga are finally coming true. We are working on a new weapon grip type for large two-handed Katanas. Here's a look at what to expect:

Lots of work being done towards bringing up the level of detail for Warframe. Here’s a peek at the improvements you can expect: 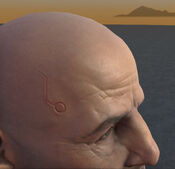 Remasters are not high on our priority list as we have already dealt with the worst offenders. Instead, our focus will be on world expansions, and incorporating tilesets into those expansions. You might see an instance of this with the new Operation next week!

An Asteroid remaster is being worked on, but we have no release date at this time.

We have a dedicated Clan team that continued to grow this year, which means we have a lot planned for the Clan and Dojo systems in the future.  An overall relighting and remaster for Dojos will be coming, in addition to a reinvigoration of content. Steve talked about customizable Obstacle courses for players to create, as well as different (faction?) themes for the Dojo’s aesthetic. If you love the Tenno style, that’s awesome, but we’re looking to expand the customization of this Clan space.

These themes may also be incorporated into your ship, as we have things planned for the third Orbiter door. 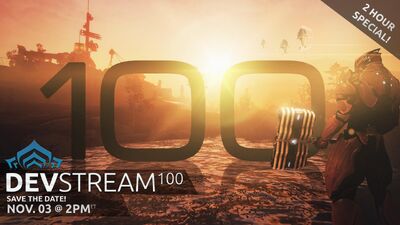 Join us this Friday, November 3rd for our 100th Devstream!

What: This is a 2-hour special! We’ll be taking 2 hours to go through some of the more embarrassing moments that predate Devstreams, looking at stats, and going over how we plan to expand on the Plains of Eidolon! Come hear news of our Console Plains of Eidolon release plans as well!

Prizes? Why yes, we will be giving away many, many prizes to celebrate this huge milestone!

Retrieved from "https://warframe.fandom.com/wiki/Devstream_100?oldid=1644031"
Community content is available under CC-BY-SA unless otherwise noted.