They opened the chamber door just in time for me to see it happen; the Archimedian erupting into a flash, jade-like and blinding. I knew her. She was the greatest scholar of genetics who ever lived. Except now she was nothing but mist and gore.

A voice boomed from within, “The Crewmen project is cancelled. Send in the next.”

The rifles at my back tried to urge me inside. Old faces filled the dome’s projections, immense and god-like. I walked into the center of the room and the scorched scent choked my lungs. All around me they watched, bored, as I knelt upon the darkened judgement disc.

The projection of Executor Ballas swelled large in front of me. I could see his purity, his symmetry, the beauty of his glittering gold irises. His voice thundered, “The principles are clear. Your sentence is death. May the Void forgive you.”

As the judgement disc began to light I stood, took a deep breath and spoke, “She will not forgive you.”

Laughter broke out among the faces of the dome. Other’s asked “what did he say?” Ballas only smiled, “You challenge us, Archimedian?”

“I do. Kill me and the Empire you are sworn to uphold dies with me.”

Ballas turned his head as the judgement disc went suddenly dark, “An appeal comes at a price. Should you fail, you and your corpus will pay dearly.”

“They already suffer in this growing wasteland. They have already paid. Will you also sacrifice the royal futures by ignoring my solution?”

“Your solution is an abomination, like you, it will be annihilated.” Ballas motioned to a guard in the corner, “Present the evidence.”

The chamber doors opened and a mass of guards entered, guns trained inward. As they reached the center, they parted, revealing a small cart. Atop the cart was a motionless creature, no larger than a hand. Its body was symmetrical, star-shaped with a seamless, matte-black shell.

A new projection, that of Executor Tuvul ballooned into the space, “It looks harmless.”

“Harmless?” Ballas boomed in Tuvul’s direction. He turned to the center of the dome, “Show them.”

On command, the guards backed away from the cart and readied their weapons. Their leader took careful aim and fired a whisper round into the body of my creation. Two of the limbs tore off the frame revealing a glossy, gelatinous interior.

Silence gripped the dome as Tuvul shook his head. Then suddenly, the creature moved, convulsed, the hard surface started undulating. In a moment the wound closed and the thing was whole again. Beside it another machine had grown from its severed parts. Their surfaces had changed however - brighter, harder, resilient to whisper rounds now.

Ballas looked triumphant as voting lights began to appear on the judgement disc.

My green death was coming, so I roared at them, “Did our ancestors, burned by fire, reject its power? No. They conquered their fear and learned to control it. The Seven Principles are a joke.”

His projection swooped down to me, “The Orokin is the law and the law is the Orokin. We are unbending. Your appeal is denied.”

Tuvul interrupted, “Our laws are sacred but do not forget The Plan, Ballas.” His visage turned down to me, “Countless other ventures have failed The Plan, how will this machine fulfill its design?”

I tried to catch my breath and speak, “The crossing to the Tau system is perilous. Adaptation and replication are the only way a terraforming journey can be made. They will build an interstellar rail as they travel, they will adapt to the host planet and prepare it for our arrival. They will save you.”

Tuvul peered down at me, “And when it completes its task, what will prevent it from turning against us, as the Seven Principles say?”

“The Void is poison to them. Once they have reached Tau they will be marooned there. To travel the rail here would destroy them. Whatever the risks, the Origin system will be-”

Ballas shouted, “Enough! Dereliction of the law threatens the entire empire. Which one of you will risk this?” Ballas was growing increasingly frustrated.

“The empire is already at risk,” cried the shrill voice of another Executor, “Or perhaps you haven’t noticed from your cozy position on Mars.” To this there was a round of applause and the judgement disk remained unchanged.

His projection seemed to shrink smaller until he finally broke his silence, “Archimedian Perintol, against my better judgement,” his disgust was palpable, “Your appeal has been accepted. You are free to go.”

One by one the projections of each Executor in the Tribunal flickered off and the guards ushered me into the hall. There I stood, rapt with shock when I heard his footsteps behind me.

“You did better than I thought you would,” it was Ballas, the man, not the projection. “It would seem nobody truly knows they want a thing until you threaten to take it away.” He broke into a smile, “Wouldn’t you agree, Archimedian?”

The Detron Crewman is a Crewman that wields a

Detron shotgun and wears a grey-white suit. These shotgun-wielders are mainly encountered on Corpus-controlled nodes. They behave similarly to standard Crewmen, but deal much higher damage at short range. It is best to take them out before they get close.

Therefore, it is recommended to face these enemies with strong and intact shields and avoid them if possible when shields are down. 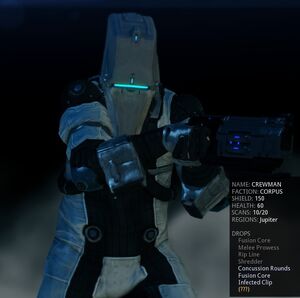 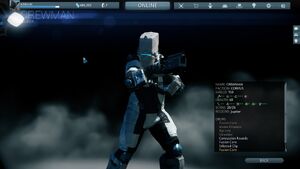 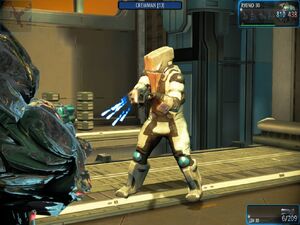 A Detron Crewman in action 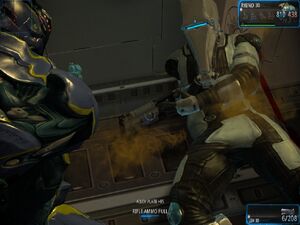 A close-up of the Detron that the variants use 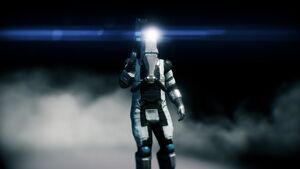 A Detron-wielding Crewman as seen in the Codex