Upon completing research on an enemy, subsequent scans will reveal their weak points.

https://www.warframe.com/droptables
Detect Vulnerability is a Sentinel precept that allows the Helios Sentinel to reveal weakspots on enemies that have had previously completed Codex scans. Hitting an enemy in the highlighted weakspot will apply a damage multiplier.

Enemies scanned via this mod do not increase your standing with Cephalon Simaris. 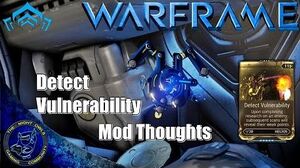