https://www.warframe.com/droptables
CODEX
A writhing tower of flesh and gristle, the Jugulus lurks beneath the surface and emerges to launch streams of organic projectiles from its wide maw.

The Deimos Jugulus is a towering stationary

Infested enemy that pops up out of the ground around the Cambion Drift, Deimos.

The Deimos Jugulus hides underground until a player is nearby in which their upper body emerges. They attack by spitting an explosive glob of mass from its maw and shooting bone glaives from its neck that deal

Slash damage. Occasionally they also shoot spikes from the ground where the player is standing on, staggering them. After taking a considerable amount of damage, the Jugulus will retreat underground and relocate somewhere away from the player.

After not taking damage for 10 seconds, the Jugulus will start to regenerate 2% of max health per second.

Deimos Jugulus possess Damage Reduction that scales depending on your weapon's DPS excluding critical hits. DPS is calculated by

A graph is available here: https://www.desmos.com/calculator/htrjngyeyb

For Proc Damage, Critical Hits are taken into account.

Encountered within Isolation Vault pit monsters. Possesses very high health regeneration, but lacks the bone glaives of its common counterpart. Its neck instead has weakpoints that can be destroyed to disable its regeneration. 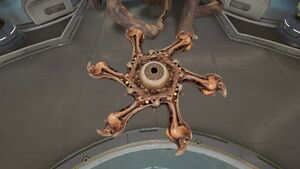 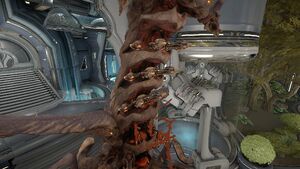