Defend an important target against waves of enemy units. If the defense target is destroyed, the mission automatically fails. Every 5 waves choose to stay and fight or extract from the mission.
—In-Game Description

Defense is an Endless Mission type in which the players must defend the assigned primary objective or objectives from being destroyed by attacking waves of enemies. The wave will be considered cleared when all the enemies in the wave have been killed.

Every 5 waves each player will receive an option to either leave the mission individually and receive a displayed reward or to continue for more rewards against progressively harder enemies for an additional 5 waves. The mission is considered completed when players accept the offer to claim a reward and exit.

If you decide not to extract but subsequently fail to clear the next set of waves, you lose any rewards accrued for the waves already cleared, fail the mission and leave with nothing.

There are a total of 18 unique Defense maps for fifteen Tile Sets available.

Nine of them are mostly specific to the Grineer:

Six (and two which were removed from the game) are mostly specific to the Corpus:

The maps A, B, E, G, L, N, P, Q, R and S have the objective in the center where enemies come from every direction, while the maps C, F, H, I and T are not so open to approach and have the defense objective near the edge of the map where enemies can't spawn and thus making them often more easy to defend. Maps A and S also have a moving objective, where the elevator platform can randomly raise or lower the objective to a different position every wave.

Map E also has 3 potential locations for the cryopod; either on the center platform where the two shorter bridges meet, or on either of the corners where the long bridges and center bridge meet. The center location is by far the easiest, as enemies are funneled through the short bridges. The corner areas are more challenging as enemies come from both of the bridges, including the small walkway along the long bride, climbing up from the ravine as well as flanking from the upper areas above the cryopods.

Map O has 4 cryopods located on 4 separate corners of the map. After each wave one of the four cryopods is randomly selected to become vulnerable to attack, indicated by a blue aura surrounding it, and will become the current enemy target. Players must thus move to each vulnerable Cryopod as they are marked every wave in order to defend them.

Rewards from Defense missions are offered every 5 waves during the extraction prompt. If a player chooses to extract, they receive the reward for that particular wave along with rewards offered from previous extraction prompts on that mission. The order of the rotations is AABC.

Wave Defense is a variation of the normal Defense rules, commonly found in Nightmare Mode, Invasions, and previously Alerts. Instead of starting at wave 1 and counting up until the players extract or leave, the waves start at a predetermined number and count down to 1, after which the mission ends automatically. There are no mission rewards until all waves are completed. This mission type was first introduced in the Artifact Defense Event.

The following Defense variants, organized by the number of waves, operate by Wave Defense rules: 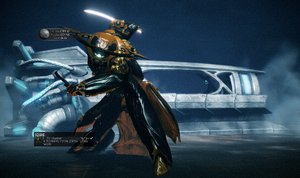 Endless Defense as seen in the lobby (U9) 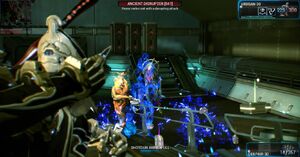 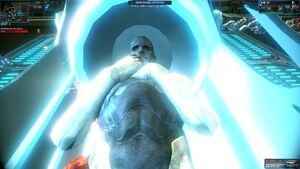 Naked Nick inside the cryopod 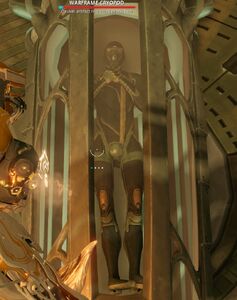 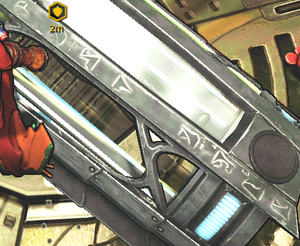