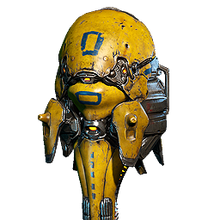 For the enemy, see Dargyn (Enemy).

The Dargyn is the basic infantry flying skiff standard to the Grineer Empire. It is designed to fulfill the role of a mobile assault vehicle that one man can operate.

Unlike Archwings and K-Drives, Dargyns cannot be "owned" by the player. Rather, the Tusk variant in the Plains of Eidolon can be stolen for personal use, but they cannot be taken out of the plains. There are multiple ways that a player can commandeer a Dargyn:

Though they lack the aerial maneuverability that Archwing offers, they are one of the fastest aerial vehicles in the game, with the top speed up to 66.6m per second and is in fact faster than most of available Archwings, only barely slower than an afterburning Itzal modded with Hyperion Thrusters (with the top speed of 67.9m per second).

Armed with a Dargyn Turret mounted on the base of the skiff, Dargyns can provide a supportive heavy fire for allies nearby, each bullet sporting a base damage of 450 with a clip size of 75 bullets with a velocity of 300m per second. The ammo is also self-regenerating if you cease firing for a couple of seconds.

Although Dargyns are crudely constructed, the skiff's armor can withstand anti-air missiles employed by the Grineer, which would knock down most Archwings available in the game. Additionally, the durability of the vehicle (health and armor) scales with the Dargyn's level.

If you are flying one and it gets destroyed by enemy fire, you will be ejected from it with some shield damage and start free-falling to the ground.

There are also several achievements in-game related to Dargryns, such as flying a certain distance across the Plains in one.

Because idle or "parked" Dargyns are treated like enemies, they have certain interactions with abilities, weapons or mods that results in peculiar effects:

With today’s update, you are now able to acquire an active Dargyn in the following ways:

In addition to this new mechanic, we have also made the following changes:

Retrieved from "https://warframe.fandom.com/wiki/Dargyn?oldid=2185951"
Community content is available under CC-BY-SA unless otherwise noted.