Darek Draga are a more dangerous foe than the Draga, due to their usage of the Kulstar

Kulstar cluster-rocket launcher, which can be rather difficult to dodge due to a combination of Archwing movement-methods and the often-cramped environment of the submerged caverns beneath the Grineer Sealab tileset.

Also, when alerted, the Darek Draga releases a cloud of brown smoke, limiting visibility of it and nearby Draga, Shock Draga and Sikula, which can prove fatal if caught in the cloud, due to the Sikula's mines.

Potential threat to players if they are caught unaware, are in an enclosed space or if they are preoccupied with other enemy units.

If encountered, keep a distance to avoid entering the cloud, and to dodge incoming missiles from the Kulstar, as mobility is reduced due to being submerged. 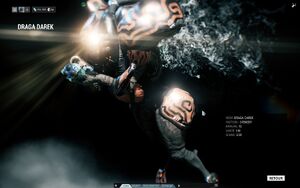 Darek Draga in the Codex