Toxin damage. Most effective against most Infested. Gas status creates clouds that damage the target and other nearby enemies over a short duration.
—In-game Description

Gas Damage is one of the six secondary elemental damage types, composed of

Toxin elements. It is particularly effective against light

Gas damage is Gas Cloud. It produces a gas cloud that deals a tick of damage each second to all enemies within a 3-meter radius; subsequent procs increase the radius by 0.3 meters up to 6 meters in total after 10 stacks. The cloud has a 6 second duration. Each tick deals

As can be seen from the formula, tick damage does not scale with any Elemental mods. Up to 10 instances of the effect can stack on the same target, with each instance having its own timer. Any instances after the 10th will replace the oldest instance.

The Gas Cloud is able to hit heads and other body parts by itself, potentially allowing headshot bonuses to apply twice (which is also affected by the added headshot damage from

Target Acquired and zoom bonuses on some sniper rifles).

If the host target dies,

Gas will continue to tick damage on all enemies caught in the host's radius for its remaining duration.

Gas does not have a Railjack space counterpart and is thus not able to proc any status effect nor is it included in calculations for status proc weighting. 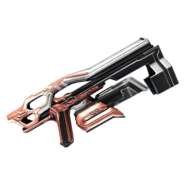 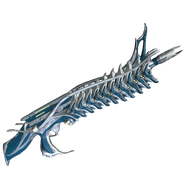 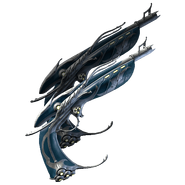 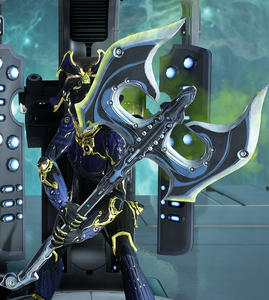 Gas visuals on a melee weapon 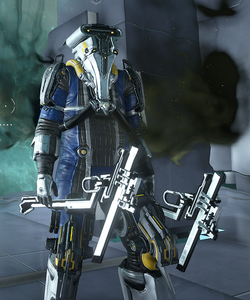 Gas procs on an enemy