Update 25.0
CODEX
Sentient tech merges with Corpus design to deliver this lethal sidearm. Fully automatic, it fires ricocheting, homing projectiles that release small clouds of Gas on impact. Alt-fire to release the entire clip without homing as a single burst.

The Cyanex is an Amalgam autopistol produced by the

Sentient technology in its design. It fires bouncing homing projectiles that deal

Gas damage, complemented by its high status chance. Its Alternate Fire consumes the remainder of the magazine as a single automatic burst with deadly accuracy and low recoil, but without

Gas damage and the homing and bouncing properties.

Impact on its Primary Fire, and

Slash damage on its Alternate Fire.

The Cyanex's blueprint can be researched from the Energy Lab in the dojo. 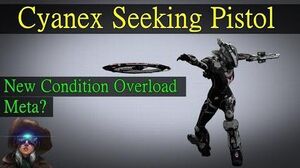 Retrieved from "https://warframe.fandom.com/wiki/Cyanex?oldid=2195414"
Community content is available under CC-BY-SA unless otherwise noted.