Similar to Invasion missions, Crossfire will have two factions hostile to each other, however players will have to fight both factions instead of allying themselves to one side.

These mission nodes are specifically set to be Crossfire modes. Any other Crossfire missions emerge dynamically through the course of the Invasion system. 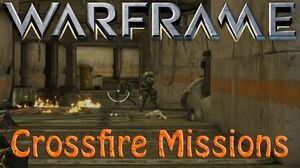