Crawlers resemble Infested Crewman with no lower limbs, which forces them to move with their hands. They are fairly agile and are hard to hit due to their habit of staying low, but besides that, they do not pose a large threat. 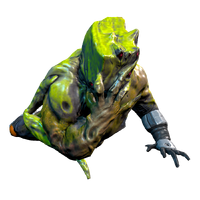 Nauseous Crawlers are yellow variants of regular Crawlers. Any players that linger too long in front of one will be sprayed with a yellow fluid that will hold them in place for a few seconds, thus stunning them. This is hinted by the crawler stopping in one spot, and it will begin to puff up slightly and shake, before releasing the fluid. This attack is not blocked by effects such as

Iron Skin which would otherwise negate the stun effect. 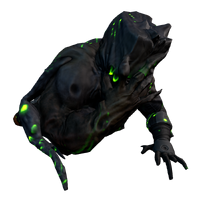 Toxic Crawlers are black and green Infested Crewmen which now contain toxic chemicals within. Killing them will release a small toxic cloud that does constant damage to anyone within, and ignores shields. 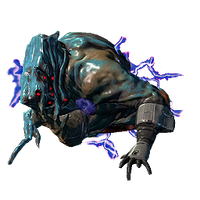 Electric Crawlers resemble a grey Infested Crewman with no lower limbs, forcing them to move with their hands. This crawler will remain at a short distance and use a continuous electrical attack that can proc

Electricity. They can target players up to around 10 meters and are not affected by stun. 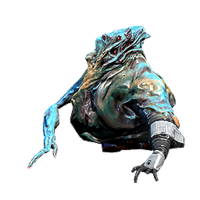 Lobber Crawlers resemble a light blue Infested Crewman with no lower limbs, forcing them to move with their hands. It will stop at decent distances away from players, arch up a bit, then spit an explosive toxic tissue that can seem to home in on players slightly, and creates a buff that appears only two meters wide although affecting players up to six meters away. The grenade does damage directly to health, although the effect is fairly weak.

Retrieved from "https://warframe.fandom.com/wiki/Crawler?oldid=2164181"
Community content is available under CC-BY-SA unless otherwise noted.