Tenno... are you ready for a SACRIFICE?

Councilor Vay Hek is the Grineer boss of Earth. He is among the most influential and dangerous Grineer, being responsible for the Cicero Toxin to poison Earth's forests, the reconditioning of the psychotic and highly aggressive The Grustrag Three soldiers, the Balor Fomorian warships that can destroy capital ships and Relays, and the animalistic and hastily bred Ghouls.

Vay Hek is fought on Oro, Earth, which can be accessed only by players of Mastery Rank 5 or higher. Upon defeating him and completing the mission, players will receive

Vay Hek's fanatical loyalty to the Grineer cause has driven him to spearhead numerous Grineer operations against the System. As outspoken as he is zealous, he is known for hijacking Tenno transmissions to send boastful messages, with targets ranging from Relay broadcasts to even a Devstream. Coupled with his leading position in the Grineer hierarchy and (later on) access to the formidable Fomorian fleet, he is one of the most dangerous enemies the Tenno have encountered.

After the infamous Grustrag Three's deranged, abrupt slaughter of fellow Grineer soldiers and their subsequent incarceration at the Grustrag Reconditioning Facility, Vay Hek orders Facility Director Dr. Tengus to recondition them in the hopes that their aggression could be redirected towards the Tenno. With Tengus mostly successful (as the Three still had lingering violent behavior towards other Grineer, but not beyond a measure of control), Hek has given new orders to the Three to accompany Grineer Invasion forces and to attack anyone who stands against them.

General Sargas Ruk, another prominent figure of the Grineer military, vehemently disagrees with Hek's actions arguing that the Grustrag Three should have been executed for their crimes (with the implication that the Three and the soldiers they killed were under Ruk's command). He also warns Hek, who continues in his attempts to tame them, that the savage Three's decreasing mental stability will ultimately be his undoing.

Concilor Vay Hek appears to have a favorable relationship with Kela De Thaym. Once, she contributed a significant donation to his campaign, prompting the former to consign one of his most vicious clones, Vay Molta, out of goodwill, to work under Kela's Rathuum as an Executioner.

In an attempt gain favor with the Twin Queens and prove his own worth, the up-and-coming young Councilor collaborated with Dr. Tengus to create the Grineer Ghouls - hastily-bred clones intended to be seeded from the orbit onto a targeted world, which they would proceed to conquer without the need for reinforcements or support.

In an act of betrayal, or perhaps as a deliberate stunt to showcase their ferocity to the Queens, the treacherous Tengus kicked Vay Hek into the Ghouls' enclosure, to be torn apart by the cannibalistic creatures. While the Queens were impressed by the display, they ordered Tengus to reconstruct Hek with cybernetics, turning him into the creature the Tenno eventually encounter. It is likely Dr. Tengus continued working under Vay Hek after this point, as there are several mentions of the former sending him subjects (Tenno or Ghoul Defectors) for dissection.

In terms of WARFRAME's story, this was Vay Hek's first introduction to players as the leader of the Grineer occupation of the Plains of Eidolon, and of Earth as a whole.

Having learned of the legend of a powerful "Glass Warrior" who slew a gigantic Sentient in the distant past, Hek orders his forces to conduct sweeping excavations on the Plains, coming into conflict with the people of Cetus. The Tenno, searching for clues regarding the fate of Saya's missing husband Onkko, attack one of Hek's dig sites and uncover a coffer sealed with a "Shatter Lock", which could only be opened with a glass key. The Tenno race against Hek to obtain the pieces needed to reforge the key, ultimately invading Hek's personal Galleon for one. Hek attempts to stop the Tenno with a legion of Grineer, including a Nox, but the Tenno ultimately succeed in taking back the glass shards Hek had obtained.

Finally, Hek's forces, while searching for the final shard, encounters a massive Eidolon Teralyst. Hek briefly expresses awe at the beast's "beauty" before ordering his men to kill it. Taking advantage of the confusion, the Tenno sneaks by the Grineer and the Teralyst and obtains the Shatter Lock's final piece. Realizing this, Hek orders a final attack on the Tenno, but they successfully defeat the ambush and escape.

After an Infested "boil" crashes onto the Plains of Eidolon, Vay Hek attempts to exploit its presence and allow Infested lifeforms to overrun Cetus, planning to then use the Thrax Toxin to poison the boil once the Ostrons are scattered. At Konzu's request, and with the clairvoyant Quills revealing that the Infested would overrun both the Ostrons and the Grineer if left unchecked, the Tenno are tasked with destroying the boil by raiding Hek's toxin stores and applying it to the meteorite. Despite Hek's efforts to stop them, the boil is ultimately destroyed, with some Tenno utilizing various catalysts to boost the toxin's effectiveness at the expense of encountering heavier Infested resistance. Despite this, the boil's presence still lingers, and occasionally resurfaces to threaten the Ostrons once more.

Following the events of The Ascension, the ghouls' approved development has since become the catalyst of the occasional Ghoul Purge event emerging in the Plains of Eidolon, prompting the Tenno to occasionally sortie into Cetus and exterminate the ever-increasing population of the malformed creatures.

In terms of WARFRAME's development, this was Vay Hek's first chronological appearance.

In an attempt to expand Grineer territory on Earth, Hek led a campaign to poison Earth's forests via the Cicero Toxin. He chose this extreme tactic after finding that centuries of Orokin influence had made the forest vegetation difficult to destroy by conventional means. The Tenno responded by formulating antitoxins, derived from Earth's native vegetation, and loading them into the Grineer Toxin Injector facilities to flush out the toxin.

Ultimately, Hek's attempts were thwarted and the forests were saved. But the Earth hasn't seen the last of the Cicero Toxin; a number of facilities continue to operate, although on a smaller scale, leaving Toxin Injector Sabotage to be the permanent part of the game.

During Ties That Bind, Frohd Bek pleads his son Darvo to stay with the Corpus, mentioning that "Project Tethra" will ultimately be their destruction. Following this, The Lotus discovers that Project Tethra is Hek's attempt to rebuild the Fomorian fleet following their destruction during Operation Sling-Stone. The Lotus directs the Tenno to Earth to Intercept transmissions revealing the location of the Grineer Shipyards, and from there the Tenno will Hijack the Fomorian Power Cores so that they can be towed away by Liset and safely destroyed in the depths of space.

During the Tenno's operations, Vay Hek sends a transmission to the Tenno, revealing that they have been simply destroying the Auxiliary Cores and that the Fomorian Shield Cores are still intact. The Tenno simply double their efforts and hijack the Shield Cores, which are more heavily guarded in response to their initial attacks. The Tenno's actions deal a significant blow to the construction of the Fomorians, forcing Hek to go into hiding. His location is unknown to all but a hand-picked group of Guardsmen known as Prosecutors.

After a long period of silence, The Lotus reveals the looming threat of Hek's Balor Fomorians, and that the Tenno will have to construct an Archwing in order to combat them. Towards the end, the Tenno are sent to a Corpus Obelisk in order to uncover more information about the Fomorians, which is abruptly interrupted by the arrival of Hek and his one of the Fomorians, taking both The Lotus and Frohd Bek by surprise. As he severs the Grineer's business contracts with the Corpus, the Obelisk is ruptured by the Balor Fomorian's weapons, preventing a conventional extraction.

Acting quickly, The Lotus orders Ordis to deploy the newly constructed Archwing so that the Tenno can escape, now armed with the knowledge that Hek's forces are ready for action.

Councilor Vay Hek finally makes his move, intending to destroy the Relays with his fleet of Balor Fomorians. The Tenno are ordered to intercept the Balor Fomorians as they slowly lumber towards the relays, and damage the warships' power core in a limited window of time. Though he succeeds in destroying some of the Relays, he exhausts his fleet and ultimately fails his main objective.

Disappointed at the result, the Twin Queens send him a message voicing their frustration, particularly regarding the high costs of constructing a Fomorian. The message ends with them dismissing Hek, replacing him with Tyl Regor for planning future offensives.

The Law of Retribution[]

The Tenno, now out for vengeance for Hek's destruction of the relays, are guided by the Lotus to hunt down and put an end to Vay Hek. The operation leads the Tenno to the heart of the Grineer Military: first a trap on Earth, then a facility on Ceres and finally Mars. Despite heavy resistance, including The Grustrag Three and an orbiting Balor Fomorian, the Tenno oftentimes manage to push Vay Hek to the corner, the latter of which always barely escaping their precise assault.

After a significantly long period of continuous assault in an attempt to bring Vay Hek to justice (spanning almost three real years of the game's lifetime), a moratorium was finally placed on the operation. The motives behind the moratorium remains unclear, but it was presumed that the Grineer councilor survived the Tenno onslaught.

Councilor Vay Hek has undergone extensive body modification to the point where the only visible flesh is his face, and even then his eyes and nose have been replaced with cybernetics. His mostly-intact head is attached to a yellow robotic suit (presumably containing whatever remains of his vital organs) that has the ability to fly or attach (and in the event of an emergency, detach) himself into a landbound Terra Frame for heavy combat. The suit also has a mask to protect Hek's face from incoming fire.

His Terra Frame is a massive, bipedal exoskeleton that is heavily armed and is capable of hovering over the ground for a few seconds. Despite its size, the Terra Frame is surprisingly agile, jumping to different platforms in order to reposition. It mounts a Drone launcher on its left side that ejects out Propaganda Drones and Orbital Strike Drones, while its right side is mounted with a large

Hek-shaped cannon that fires rockets. The Terra Frame's design seems to have been inspired by birds, particularly its large "tail" and the screeching the Terra Frame makes during combat.

Unlike the Drone form, the Terra Frame's entire body is vulnerable to damage.

Vay Hek's drone form, with its entire body being invulnerable, is notoriously difficult to damage due to his constant flight, his weakspots on the head and backpack only opening during his Propaganda Broadcast, and said weakspots being tiny. It is recommended to slow him down with

Avalanche, or the Operator's Zenurik Temporal Blast to make the weakspots easier to target.

Vay Hek retreats to his boss arena, which is a large open area with a deep lagoon in the middle, along with several short tunnels, large fans, and high-pressure steam vents to take cover in and move about. The Tenno must combat his drone form until they deplete all its health.

Feigning defeat, Vay Hek summons his Terra Frame and boards it. Unlike the Drone form, the Terra Frame's entire body is vulnerable to damage. After defeating the Terra Frame, Vay Hek detaches his drone and flees. 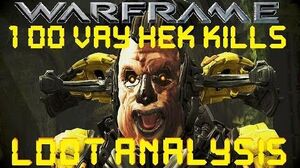 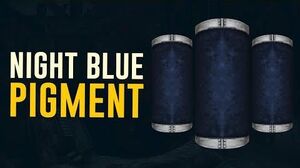 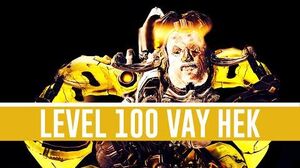 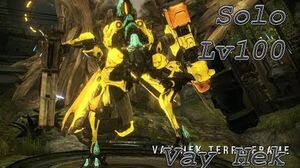