Argon Crystal 50%
Orokin Cell 50%
Vor Sigil
I was cut in half, destroyed, but through its Janus Key, the Void called to me. It brought me here and here I was reborn.
—Vor

Corrupted Vor is corrupted Captain Vor and is the boss of the Orokin Void as an encounter in the high-level Void missions (Level ≥40). It is known that he was revived by his own Void Key sometime after his defeat and has since turned into the guardian of the Void. Vor will make his presence known via a taunting transmission, after which he will appear near players to engage them in battle.

Upon defeat, he is guaranteed to drop one of the four status/elemental

Toxic Barrage, along with either an Orokin Cell or Argon Crystal.

For lore before his corruption, see Captain Vor.

Corrupted Vor still resembles an aged light Grineer in unique brown armor, with the exception of his torso being separated from his legs, linked solely by the energies of his Orokin Key manifesting as a swirling mass of light in what used to be his abdomen.

Corrupted Vor's battle is much simpler compared to his preceding form, though no less dangerous. This is a single-phase battle, unlike most bosses, with no invincibility phases. As he spawns at level 40-50, Corrupted Vor possesses very large health, shield, and armor values. Depending on the mission, Corrupted mobs may constantly spawn to assist him until he is defeated.

The only part of his body that takes damage is the swirling mass of light connecting his abdomen and lower body, and no other part of him takes any damage although they are still susceptible to proc. His tendency to Teleport almost constantly may prove hitting the light difficult.

“That is just the sort of behavior I just can't let go uncorrected.”
This article contains game data that is missing or partially missing reference data. Links to the provided data is appreciated. 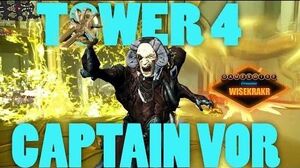