Corrupted Nullifiers are Corpus Nullifier Crewmen enslaved by the Orokin Void Tower's Neural Sentry, featuring their nullification fields capable of neutralizing Warframe powers as well as deflecting ranged attacks. They appear only on level 30-40 Void missions. They can also appear in any Tower Void Defense mission. 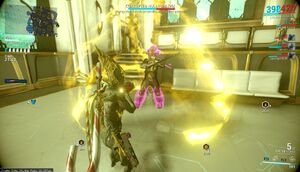 Despite their description, Nullifiers can become mind controlled