Our shuttle touched down in the ancient city center of New Uxmal for the second time in two days. We rushed to the entrance of the lower chambers, a labyrinth of tunnels carved into the rock. Behind us marched a full complement of bodyguards and Moas.

Menz asked again, “How can you be sure?”

“We’ve been connected for a century and a half, I’m sure.” It felt odd to be speaking aloud about something that Remballa and I had always just kept between us. That feeling of attachment, that anxiety that welled up within one of us when the other wasn’t right. That emptiness I felt when I thought they’d killed her and the joy when the connection came rushing back this morning.

We were twins bred for purpose, cloned and then modified so that we could both interface with the Lora Device. The Orokin had a visage imbued with variation, beauty and symmetry, but we had the Lora nodes protruding from our right temples. Their skin was silken, ours was weaved with ribbons of metallic facia that snaked around our bodies and into the Lora Device embedded in our palms. We made them uncomfortable and they made that known, that is, until they were sick or hurt and then we were saviors. That never bothered me though, I loved my sister and we had each other. I wasn’t about to leave her in the middle of this nightmare.

Hesitation was building in Menz’s face. I had command authority but if he balked, the soldiers would follow him. I needed to force his support, “If you were Tenno, there’d be no question.”

“The betrayers…” he stopped himself. “Look, Remballa’s gone. The Infested killed her yesterday, we both saw it.” His frustration was building, “Damnit, this was supposed to be a relief mission, we can’t-”

“It still is a relief mission.” I interrupted, “You want to go back to retirement Menz, or are you still a Dax?” I knew that stung.

Menz stiffened. He’d been cast aside before. He wasn’t about to let duty slip through his fingers again. Menz stared into me, “Are you willing to risk becoming one of those things for a feeling?”

I nodded, the answer was yes, for this feeling.

We entered the subterranean passage, weapon lights illuminated chiseled red stone as we marched deeper into the blackness, past shops and apartments, all carved into the rock eons ago. This city was as old as Mars's atmosphere. Everything was silent, save for the occasional snap of bone under a soldier’s boot. Three days ago this was a busy thoroughfare, now, bloodied scraps of clothing littered the route like confetti. We emerged from the tunnels into cavernous arcade, the Old Market Road. This is where she had led me.

“Here they come,” shouted Dax Menz and creatures began to drive at us from every door and window. All teeth and claws and eyes that looked looked so familiar, what kind of animal has eyes like that?

“Square formation!” Menz commanded. We backed up to a wall and the Moa’s moved to form a perimeter, with the bodyguards behind them and me in the middle.

I closed my eyes and focused the device, through it I could feel each one of the bodyguards. A sergeant was slashed through the leg and I directed my energy toward him, his wound closed and he resumed fighting. Acid spit burned another soldier’s chest, I pushed energy to her, eased the pain, then reversed the damage, she would live. This was so much harder without Remballa. Another soldier was bit on the throat, he’s dying, there was nothing I could do, so I ease his pain and let him go. The rate of fire slowed, had we pushed them back?

I opened my eyes to see the Moa’s beams incinerate the last few attackers. I was drained. I wasn’t a combat Lorist, Remballa and I were relief workers, used in disasters and outbreaks, not this.

I felt a surge of that familiar connection, Remballa’s energy pulsed through me. “She’s coming,” I shouted.

“What?” Dax Menz head whipped around to look at me.

“I don’t know,” I said pointing at a hall exit, “she’s coming, from that direction.”

“More Infested!” Shouted a soldier who motioned to the same exit.

A mess of figures shambled forth. These were different, bigger and slower. I could feel my sister in there somehow, it was so strong. The Moas opened fire. I wanted to tell them to stop but how could I? I felt plasma beams burn the creatures and then I felt Remballa heal them. Why? Multiple connections now, I felt her many times over, it didn’t make sense, until it did; she was those things, all of them. They took our fire and kept coming. I felt her, no them, shudder as bullets ripped through flesh and then as flesh was made new again. They were Lorist Infested, my sister the healer, remade as monster and here to kill us.

More rushed in. I felt the healing in them too. I focused just as the first wave broke through our lines. Moas were toppled, soldiers were tackled, teeth tore flesh. I was overwhelmed, I couldn’t control it, their pain fed back through me and I collapsed. Something’s jaws latched onto my foot. Infection pulsed into my veins.

And then I felt it, a new presence, another healer? I’d felt this before, was it, it couldn’t be… I opened my eyes only to be blinded by an intense flash, followed by a crash, like a thousand crystal goblets all being shattered at once. All went silent, the Infested were dead. I felt nothing now.

My eyes readjusted. I was surrounded by bodies. I saw something run away, a streak of silver and gold. It shot straight up the cavern wall and out into the sunshine above.

I didn’t have time to think, I took a breath and a wave of pain surged through my entire body. The Infestation had already taken my leg, soon it would claim the rest of my body. I didn’t care, my sister was gone, this was my time.

A shadow cast itself over me. I looked up. It was Menz, alive, he stared down without speaking and then unsheathed his massive combat blade and raised it high above his head.

With sudden and sure force his blade sliced down and through me. I contorted in with the pain.

His hands grabbed my shoulders, “Heal yourself!”

The adrenaline must have struck at that moment because I bolted up, still stunned, he had cut the infected leg clean off.

“Damnit Ontella,” Menz was shaking me hard now. “Heal yourself!”

Instinct took over, I snapped into focus and sent all the energy I had left through the device and down to the wound. I stopped the bleeding and neutralized the remaining toxin. I nearly passed out, I had nothing left.

Menz hoisted me onto his shoulder, “I’m taking us back to the shuttle,” and he began walk out of there. A few scattered survivors and robots pulled themselves along behind us.

As we approached safety I coughed and whispered to Menz, “I can feel her again.” 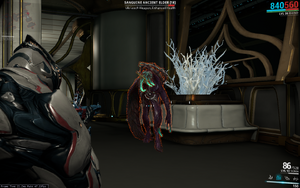 A Corrupted Ancient with the Lifesteal Leader buff. 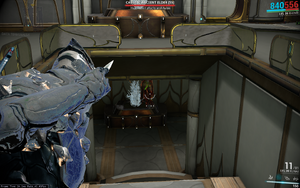 Corrupted Ancient with Fire Eximus buff, stuck on a plant. (1/3) 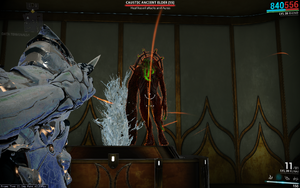 Corrupted Ancient with Fire Eximus buff, stuck on a plant. (2/3) 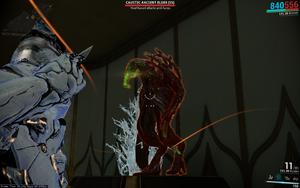 Corrupted Ancient with Fire Eximus buff, stuck on a plant. (3/3)