The Corrupted are enemies encountered in Orokin Void levels. Corrupted units are actually Corpus, Grineer, and Infested creatures that have been implanted with a control device, allowing the "Neural Sentry" of the Orokin Towers to manipulate them. Most Corrupted appear grey and drained of color, except for the golden Orokin control devices on their heads. These devices appear similar to the Orokin material on Frost Prime's helmet.

The Neural Sentry also provides the Corrupted with Orokin weapons to aid in the defense of the tower. The tower is not without its own defense, and utilizes flying sentries similar to Shield Ospreys that provide shields to the Corrupted. Orokin towers also sport defense turrets, elemental dangers, and cleverly hidden traps.

The Corrupted have unique taunts and battle calls which range from evil laughter to electronically dampened moans. However, any language present from their their non-corrupted life is stripped away.

Essentially an Orokin-controlled Grineer Lancer. In comparison to normal Grineer Lancers, Corrupted Lancers have lower HP pools and doubled armor values. They wield Deras instead of Grakatas, and throw grenades in a manner similar to regular Lancers.

An Orokin-controlled Corpus Crewman. Like regular Crewmen, Corrupted Crewmen are protected by shielding, and have heavily armored heads. They differ from Corpus crewmen, as they wield Strun shotguns instead of Dera plasma repeaters. These Struns fire a single, highly condensed energy pellet, which has a small amount of travel time.

Orokin drones behave in a similar manner to Shield Ospreys. They project shields to nearby Corrupted allies. The energy shields created by Corupted drones recharge instantly, and their charging rate is rapid. Unlike standard Shield Ospreys, they cannot be Mind Controlled by Nyx, instead yeilding an "Invalid Target" notification.

These corrupted Fusion MOAs behave in a similar manner to their Corpus brethren. 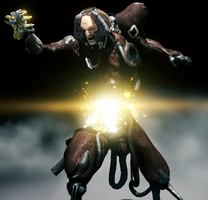