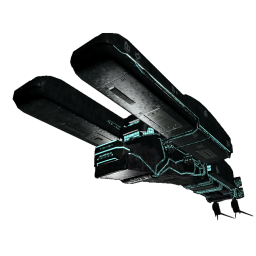 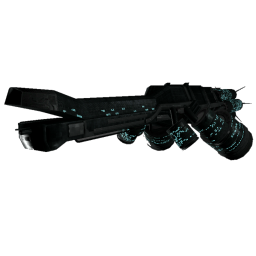 Corpus Ship Tile Sets are sterile, blueish silver, and straightforward. They were the first tileset ever implemented in WARFRAME and have been slowly replaced by the other sets as they have come out. These older tilesets were not built with many intentional parkour areas or almost any "sneaky" paths, and is currently being updated to match with current gameplay mechanics. Corpus are the primary occupants of the set with other factions occasionally appearing. They are known for having many elevators, doors, low ceilings, and lots of long stretches of narrow and cluttered halls. The player will find the corpus Security Cameras, Laser Barriers, and turrets among these sets with the standard corpus lockers and destructible canisters. Many of the rooms have been blended into the Corpus Outpost tiles.

The images indicate that there are at least three different classes of 'Corpus Ship' - a simplistic finned hammer-like model known as the Obelisk, which is often used for an orbital bombardment; the double hulled Stanchion model that also may be a warship; and the Pillar, a more slender class sporting what seem to be multiple containers (or perhaps habitat-pods as suggested by their excessive illumination); all these currently share the same tileset and their navigation consoles display the same hologram (of the container ship). The three different holograms can also be found in the Energy Research Lab in the Clan Dojo.

When you have sided with the Corpus and battle against the Grineer in Invasion missions, a ship-specific tile replaces a dead-end tile. The special tile is either large or small, and consists of an 'equipment room' with benches, equipment lockers, and Elite Crewman uniforms. In case of a big tileset, two Grineer boarding torpedoes can be found. In case of a small tile, only one can be found inside. 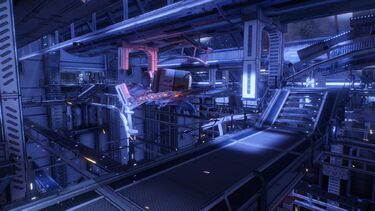 The ship has suffered structural damage, as material from walls is scattered, as tubes and wiring is severed and hanging from the ceiling as atmosphere is venting. Each boarding torpedo holds a single Grineer Lancer. It has a circular ramp which opens up when you enter the tile. The Grineer inside counts as a kill in an Exterminate mission, but is not required to kill, meaning that the mission can be completed without bothering the Pods occupants.

In the Infestation invasions, a slightly modified set of tiles is used. You often start in a storage room (insertion tile) and proceed through a hallway specific to this type of mission, via an Elevator tile, through another hallway to the Hangar Bay. There are several ships stored here, one just arrives from the portal with some Infestation growths on the sides. This hangar is quite wide, seeing that two conveyor belts run from a loading platform through the center of the tile, for the dropships to pick up.

Once you proceed through the portal, you will enter a small docking area which has been overrun by Infested. This area seems to be a place where dropships are fitted with cargo. On the opposite side of where you entered, you will find a door locked from the inside, but this type is blue. They cannot be opened from the outside, you will need to find your way through air ducts to enter the area behind the doors. Once inside, you can walk towards the doors, they will open like all doors, but not close again.

Atmospheric Vacuum can be triggered by breaking cracked Reinforced Glass. This hazard is usually present near elevators, in T-shaped corridors and in the long pathways obstructed by containers. If you damage a Reinforced Glass, the glass could break and cause your health and shield to reduce by one point every half a second. 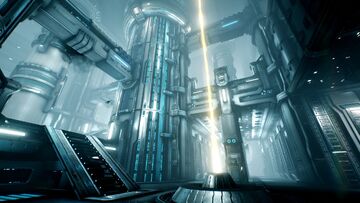 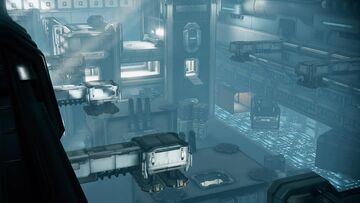 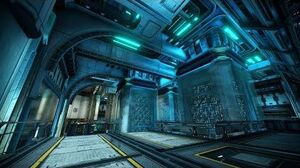 Retrieved from "https://warframe.fandom.com/wiki/Corpus_Ship?oldid=2050961"
Community content is available under CC-BY-SA unless otherwise noted.