Corpus Outposts are massive Corpus-controlled mountainous bases located on snowy planets. Added in Update 7.0 (2013-03-18), they were the third tileset released.

These outpost locations are known for having a diverse terrain of varying altitudes with many sniping locations and loot locations hidden throughout that require parkour skills to access. With many wide open areas to traverse in, it was the first tileset to be based on a planet's surface instead of in a spaceship, the second being Grineer Settlements. Large cargo crates can often be seen strewn around the map, often with goodies inside, and giant Osprey drones can be found carrying them through the air.

Aside from the many caves, crevices and mountainsides to explore, the Outpost is also particularly known for its extraction tile, which features a very long slope that players can slide down the entire way to reach the extraction ship. Another unique feature is terrain alteration in the middle of a mission, as the Corpus transports that land in the hangar tile become solid parts of the map. 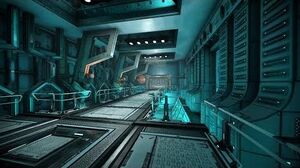