The Corpus Gas City is a tileset which was introduced in Update 11.0, serving as the home of Alad V. The Gas City has many facilities built to harvest the power of the planet's gas. The indoor areas vary greatly from neat lobbies and labs to dusty maintenance areas for the harvesters, while the outdoors allow players to traverse the deck of the ships under an eternal sunset. Scavenger Drones, Detron Crewmen, and Anti MOAs were introduced with this tileset, and were initially exclusive to locations using the tileset.

The tileset received a complete overhaul in Update 25.0, adding large open spaces for advanced maneuvers in addition to remastered graphics and audio. Vapos Corpus and Amalgam Sentient enemies, Disruption game mode, and the Ropalolyst boss were also featured in the remaster, along with its own Spy vaults and Sabotage variant.

Several large tiles in the Gas City have locked orange doors with active holograms on them. To gain access to them, players have to perform a series of tasks within the tile itself. Note that several secret laboratories may spawn per mission.

Partnership Fragments are unique to the Gas City and are hidden about the tileset. They can be scanned to unveil lore about the Alad V and his Amalgams.

Several exposed pipes can be found on walls and ceilings in the Corpus Gas City, some of which may have a rectangular orange light on them. This denotes that they are destructible, and when destroyed by weapons or abilities can unleash a 10-meter jet of flame that deals

Heat damage to any units caught within it.

Several doors on the tileset have Scanners on them, large devices that project an energy curtain covering half of the door either horizontally or vertically. While passing through these curtains has no effect on the player, they will trigger defensive systems on the rooms it connects to, with the type of defense depending on the room. Players can either avoid the energy curtains or destroy the scanners themselves to prevent them from triggering defenses.

Oddly enough, the Ropalolyst will make its appearance in this tileset even if the player hasn't finished the The Sacrifice (and any other main quests that would result in the monster's arrival). 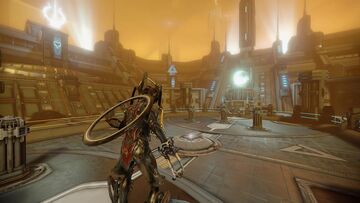 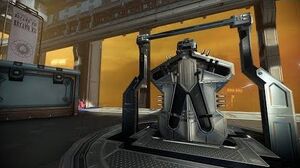 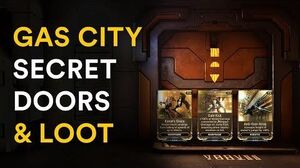 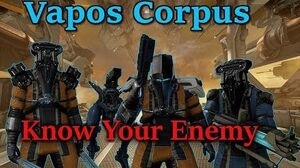 Put your parkour skills to the test in the vast and viscous aura of the Remastered Jupiter Gas City tileset, featuring completely remastered graphics, tilesets and audio design in each tile.

During your missions, storm your way past gas harvesters and massive reactors to expose the inner workings of a corporation overruled by the greedy obsessor, Alad V. New Vapos Corpus variants stalk the many corridors alongside those instructed to maintain the integrity of the Gas City from....intruders. Tread carefully, as some Vapos Corpus have been equipped with all new Vector Shields.

But don’t stare too long into the colossal golden sky surrounding this floating empire. You might see something you wish you hadn’t.