https://www.warframe.com/droptables
Continuous Misery is a mod that increases the status duration inflicted by rifles. 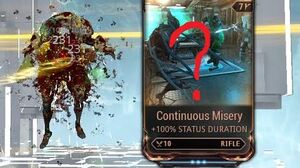