When we woke the Orokin terraforming engines, we also revived species long since extinct. I need your help to save these beasts from the Corpus' Feed and Research Division... 'scientists'. Track-and-tranq. Now: let's get you sorted out with a tranq rifle and echo-lure.

The Eidolon-Moh has weathered the introduction of many invasive species, but none more destructive than the Grineer themselves.

Conservation is a non-combat activity available in Landscapes that involves tracking, luring, and capturing the local fauna alive, to be protected from the habitat destruction caused by Corpus and Grineer activities.

Once players have enough Standing with Solaris United in Fortuna they will need to purchase a Tranq Rifle from The Business.

Echo-Lures are reusable gear items that target specific animals to hunt and may be purchased from either The Business for Orb Vallis animals or from Master Teasonai for Plains of Eidolon animals for players with enough Standing with those factions.

Both a Tranq Rifle and an Echo-Lure are required to complete a hunt in Orb Vallis, but only the Tranq Rifle is needed for the Plains of Eidolon.

Once a Tranq Rifle and Echo-Lure have been purchased, players can equip them in the Gear menu through their Arsenal. Note that it is not necessary to equip more than one item, as all available Echo-Lures and the rifle will be selectable through the conservation menu once any of them has been readied.

Now properly equipped, players can head out into the Landscape to begin. With the Tranq Rifle in hand (default hold Q  and select the rifle), select the Echo-Lure for the animal to be hunted and the map will display pawprint symbols indicating the starting points from which that animal may be tracked.

Once the player has armed themselves with a Tranq Rifle or Echo-Lure, the conservation gear menu will automatically appear on the bottom right of the screen, indicating the Tranq Rifle and currently equipped Echo-Lure. Players can change their current selection by holding the respective key (1 , 2  or 3 ), while pressing the respective key will ready that displayed item. Consequently, use of Warframe abilities (bound to the number keys) will be suppressed while equipped with a conservation item.

After interacting with a starting trail, there are four steps involved in capturing a creature:

In the Plains of Eidolon, the player can catch any roaming fauna they encounter, with trails serving as points of convenience. The use of the appropriate Echo-Lure can still lure in these wildlife. There are no roaming fauna in the Orb Vallis, however, due to being driven to near extinction.

Pheromone Synthesizers (Orb Vallis) and Pheromone Oota (Plains of Eidolon) are items that can be bought from reputation vendors to change the rarity of animal spawns. They are consumed on use. The following table shows approximate spawn chances (data gathered based on limited number of tests and mioght not be entirely accurate).

When a creature is caught, the player is awarded Standing and a tag for the specific variety. Tags can be redeemed at Master Teasonai for a Plains of Eidolon Conservation Emblem or The Business for an Orb Vallis Conservation Emblem or Orb Vallis Beast and Bird Emblem. Both also offer Orbiter Floofs in exchange for tags of their respective species.

"A timid rodent that is easily frightened." 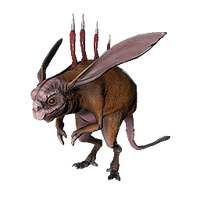 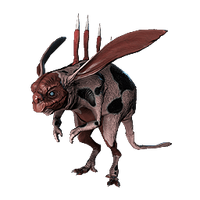 A rare Kuaka subspecies. They dislike light and have adapted to living underground. 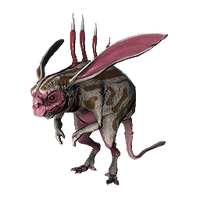 "A carrion-eater and opportunistic bird-of-prey. Condrocs gather, feed upon carrion, and occasionally, hunt in groups known as 'committees'. Several committees will be led by an Emperor."

When roaming, Condrocs will appear in groups of two or three and are already stationed on the ground, but when called from a calling point only one will spawn.

Condrocs are a flying species, making them difficult to capture until they land at the calling point. 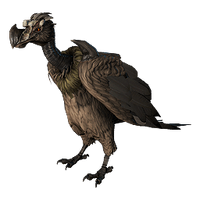 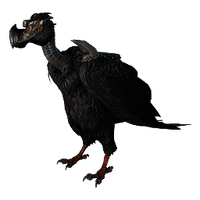 A rare Condroc subspecies. Unlike other Condrocs they hunt alone for live prey. 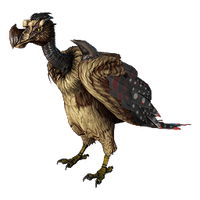 "An avian of ridiculous appearance found along coastal regions and around large bodies of water. Mergoo circle and squawk at the sight of marine predators. Many an Ostron fisher owes their lives to these odd little birds. Killing one is considered very bad luck."

Like Condrocs, Mergoo are a flying species, making them difficult to capture until they land at the calling point. 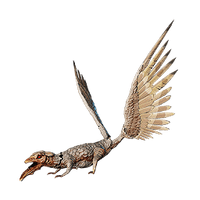 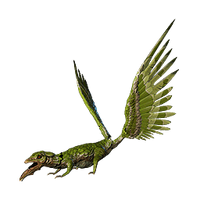 A rare Mergoo subspecies. Their plumage makes them difficult for hunters to spot them among foliage. 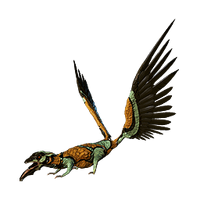 "The Vasca strain is a symbiotic blood-borne virus transmitted via the saliva of infected kavats. Existing solely to propagate itself the virus makes the host increasingly dependent upon the ingestion of blood, thereby spreading itself further and faster through the population. Vasca-infected kavats, over time, lose all sense of themselves becoming increasingly cunning, violent and ravenous."

When roaming, Vasca Kavats will appear in groups of three, but when called from a calling point only one will spawn. 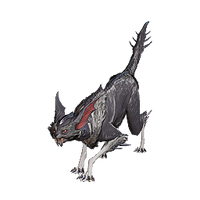 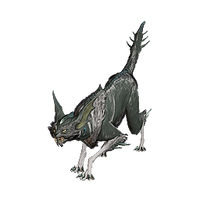 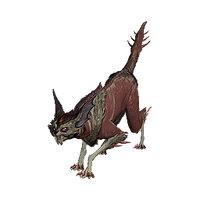 "Native to the fungal forests of Venus, the Pobber is a skittish rodent possessed of an objectionable odor. Always found in groups, they flee at the slightest hint of trouble. They are a primary food source for the Virmink and Sawgaw."

Pobbers notably appear in groups of three. They also do not sniff out their pursuers, possibly due to their own repugnant odor.

A rare Pobber subspecies. A descendant of an Orokin domesticated strain that is less odorous with a sweeter temperament, but far less hardy.

A very rare Pobber subspecies. They have adapted to living underground, away from their natural predators.

A rare Virmink subspecies. Their pelts are favored by the Corpus.

A very rare Virmink subspecies. Originally thought to be long extinct after the downfall of the Orokin Empire, they have been secretly preserved and revived alongside the local fauna and the neverending blizzard of the Orb Vallis itself.

"'Soar Gore' as the Solaris call it, this crimson-faced bird of prey circles and stalks the cliffs and fungal groves of Venus, searching for rodent prey."

Sawgaws are a flying species, making them difficult to capture until they land somewhere. They usually prefer to perch on top of the giant mushrooms. 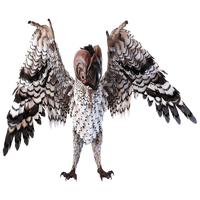 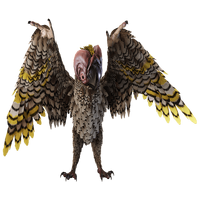 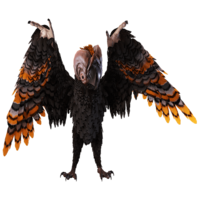 A very rare Sawgaw subspecies. Once thought to be extinct due to lack of mates in hopes of breeding them, in addition being exterminated by the Corpus in the name of profit.

"Favoring thunder, lightning and cratered-out areas Bolarolas are all about defense. Their armored plates protect them from most predators, tucking-and-rolling to make good their escape."

Bolarolas are covered in an armored plating that neutralizes tranquilizing shots. Only their underbellies are vulnerable, and they will occasionally lean back to expose this weakness. Should they sense danger they will curl up to shield themselves, and when fleeing they will roll away.

A rare Bolarola subspecies. Their black plates are said to be used in Grineer formal wear.

A very rare Bolarola subspecies. Their spines have evolved into thorn-like barbs that give them an even greater defense.

"This hideous creature is terrible to behold but will not attack unless provoked. When it does, its roar will shake the bowels of even the most steadfast tracker."

Between the starting point and the calling point, a trail of

Toxin damaging scat will line next to their footprints.

Horrasques will crawl underground, periodically exposing their heads. If they reach the calling point they will surface and expose their whole body, making perfect captures much easier. Must be shot two times with the Tranq Rifle to be brought down.

A rare Horrasque subspecies. Horrasques are not know to be the most graceful of swimmers, but this species persists.

A very rare Horrasque subspecies. Hunted to near extinction due to the insulating properties of their hide.

"The Stover is a kind of proto-Kubrow that resurrected when Venus thawed. When grouped in a pack, Stovers are relentless opponents."

Stovers make their appearances within caves, whose narrow passageways make confrontation almost unavoidable. Instead of immediately fleeing, they will viciously attack their pursuers. Must be shot three times with the Tranq Rifle to be brought down.

A rare stover subspecies. Often intimidates any other Stovers due to bossy behavior.

A very rare stover subspecies. Often being referred to "majestic".

"The apex predator of the Venusian plains. These massively framed beasts travel in groups and mark the territory surrounding Orokin cooling towers as their own. Kubrodons are a danger best avoided."

True to its status as the apex predator, the Kubrodon's more acute sense of smell allows them to locate their pursuers, and will use a ramming attack to make good their escape. Must be shot twice with the Tranq Rifle to be brought down.

Additionally, Kubrodons are 75% resistant to all Warframe abilities. For example, when using

Despite being mentioned to travel in groups, only one Kubrodon will respond to the lure's call.

A rare Kubdrodon subspecies. Unimaginatively named due to not being found anywhere outside Orb Vallis.

A very rare Kubrodon subspecies. They are said to be possessed by a dark intelligence and kill solely for the sake of pleasure.

The Tranq Rifle is innately silent and has 3 rounds in its magazine, with a reload time of 2 seconds. When zoomed in (RMB ), the rifle scans for fauna, with a greater detection range than Codex Scanners and Synthesis Scanners.

You can now track and tranq animals in the Plains! Master Teasonai will be your source for Echo-Lures and Rarity Boosters as you track down, capture and get these animals to safety. Echo-Lures are not required as these animals continually roam the Plains, but calling them will bring them running (or flying!). A new Conservation Badge and Floofs from Master Teasonai await your efforts.﻿

An avian of ridiculous appearance found along coastal regions and by large bodies of water. Mergoo circle and squawk at the sight of marine predators. Many an Ostron fisher owes their life to these odd little birds. Killing one is considered very bad luck.

Update 24.2
NEW CONSERVATION ANIMALS!
Three ancient animals have returned to the Vallis, and we need your help to save them. Purchase their new Echo-Lures from The Business, track them down and whisk them away — before the Corpus get to them first.

Sawgaw
This crimson-faced bird of prey circles and stalks the cliffs and fungal groves of Venus, searching for rodent prey.

Horrasque
This hideous creature is terrible to behold but will not attack unless provoked. When it does, its roar will shake the bowels of even the most steadfast tracker.

Stover
The Stover is a kind of proto-Kubrow that resurrected when Venus thawed. When grouped in a pack, Stovers are relentless opponents.

Retrieved from "https://warframe.fandom.com/wiki/Conservation?oldid=2125736"
Community content is available under CC-BY-SA unless otherwise noted.