Update 20.2
CODEX
Deploy the radar disc to reveal hidden enemies and then strike with precision shots that punch through all obstacles in the way.

The Zenith is an assault rifle available through the Daily Tribute system, as a reward for logging in for 500 cumulative days. The primary fire shoots fully automatic shots with high fire rate, and features an Alternate Fire that deploys a disc that highlights nearby enemy heads through walls and obstacles while altering the weapon to a semi-automatic fire with very high damage and infinite Punch Through.

Slash damage on primary fire, and 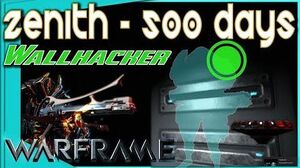 Retrieved from "https://warframe.fandom.com/wiki/Conclave:Zenith?oldid=1992755"
Community content is available under CC-BY-SA unless otherwise noted.