Viper Wraith
CODEX
A full-auto pistol known as the most compact and lightweight weapon of the Grineer arsenal. Though it has a small clip size, the Viper has a very high fire rate and ultra-fast reload times thanks to a simplified magazine design.

The Viper is a machine pistol of Grineer design issued to their Shield Lancers. It is the most portable weapon manufactured by the Grineer and boasts a high rate of fire and an extremely efficient magazine reload, but poor accuracy. 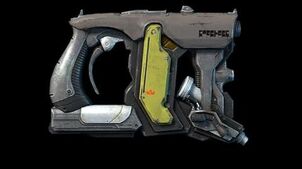 How To Build The Viper
Add a photo to this gallery

Retrieved from "https://warframe.fandom.com/wiki/Conclave:Viper?oldid=1925937"
Community content is available under CC-BY-SA unless otherwise noted.