Nezha has reduced friction on the ground, preserving momentum gained from movement for far longer; this makes Nezha capable of especially long slides. It has a reduced effect from cooperative missions. 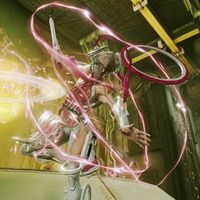 Ward Recovery is a Warframe Augment Mod for

Warding Halo in Conclave that recovers some of the energy used to cast it, based on how much protection is left.

Retrieved from "https://warframe.fandom.com/wiki/Conclave:Nezha?oldid=1735786"
Community content is available under CC-BY-SA unless otherwise noted.