The Magistar is a heavy, flanged mace. It was released in Update 11.5 alongside

Oberon and The Cicero Crisis.

The Magistar is a requisite ingredient for the 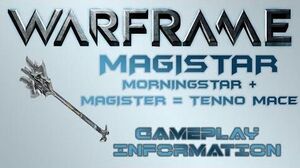 Warframe - Gameplay & Information Magistar
Add a photo to this gallery

Retrieved from "https://warframe.fandom.com/wiki/Conclave:Magistar?oldid=1932909"
Community content is available under CC-BY-SA unless otherwise noted.