The Machete Wraith is the Wraith variant of the

Machete, featuring an increased base damage and attack speed. Originally obtained from completing at least 25 missions during The Gradivus Dilemma, the Machete Wraith is the second Wraith weapon to be released, after the

This weapon was first introduced as a potential reward from The Gradivus Dilemma event if players fought in 25 battles and the conflict favored the Grineer. As the Grineer succeeded in the event, the weapon was awarded, complete with a free weapon slot and pre-installed Orokin Catalyst.

The Machete Wraith is now potentially sold by Baro Ki'Teer in the Concourse section of the Tenno Relay for 250,000

‍410. Note that Baro Ki'Teer's stock changes with each appearance, and this weapon may not be available on a succeeding appearance. 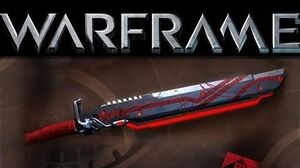 Retrieved from "https://warframe.fandom.com/wiki/Conclave:Machete_Wraith?oldid=2186082"
Community content is available under CC-BY-SA unless otherwise noted.