Machete Wraith
Prisma Machete
CODEX
A ferocious melee weapon crafted by the Grineer and carried by their elite melee forces.

The Machete is a Grineer melee weapon released in Update 8.0 and used by Grineer Scorpions.

Though the Machete was removed from the market in Update 10.3, its blueprint was temporarily awarded to players who logged into Warframe between July 9 and July 16, 2014 as a special gift for the delay in completing Update 14.0. It was also released as a reward for the Tactical Alert "One Thousand Cuts". Machete was made available in the market once more for a limited time between May 25th, 2017 and June 1st, 2017.

As of Update 20.6, Machete is available as a login reward, in the form of a blueprint. 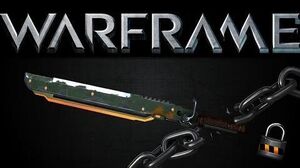 Retrieved from "https://warframe.fandom.com/wiki/Conclave:Machete?oldid=1931121"
Community content is available under CC-BY-SA unless otherwise noted.