Lato
Lato Prime
CODEX
A special version of the standard Lato pistol with a slower fire rate but offering higher accuracy and damage values. The Lato Vandal has been customized by the Tenno with a blue-green metallic finish, and Lotus branding on the grips.

The Lato Vandal is the Vandal version of the

Lato, gaining improved damage and accuracy in exchange for a reduced rate of fire.

After the game entered Open Beta, Lato Vandal was unobtainable until Update 22.18, in which it was added as a reward in Elite Sanctuary Onslaught, a game mode introduced in that update. All the parts can be traded, although players must have a Mastery Rank of at least 7 to acquire the blueprint. 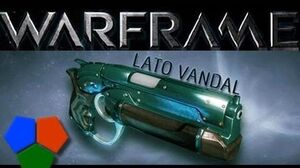 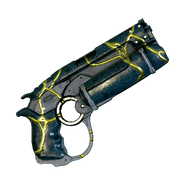 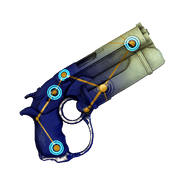 Retrieved from "https://warframe.fandom.com/wiki/Conclave:Lato_Vandal?oldid=1919966"
Community content is available under CC-BY-SA unless otherwise noted.