The Kunai are a set of throwing knives, released in Update 8.0. It deals a significant amount of damage, but can be hard to aim with because of its arrow-like arc projection. 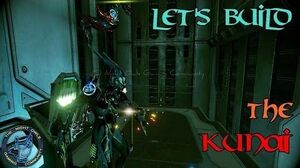 Retrieved from "https://warframe.fandom.com/wiki/Conclave:Kunai?oldid=2017345"
Community content is available under CC-BY-SA unless otherwise noted.