CODEX
This hooked blade rewards critical hits to those skilled enough to strike with finesse.

The Krohkur is a standalone Grineer sword sporting high base damage but slow attack speed. The Krohkur was introduced in Update 22.0 (2017-10-12). 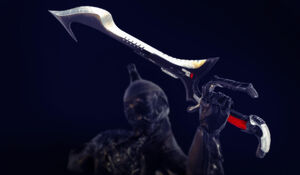