Update 17.0
CODEX
Spike enemies to the wall or reel them in with this automatic harpoon gun.

The Harpak is a harpoon gun wielded by Drekar Elite Lancers. It has two firing modes; its primary firing mode fires a burst of three harpoon projectiles, while its Alternate Fire charges up to fire a chain-tethered harpoon that will damage foes and knocks them down. 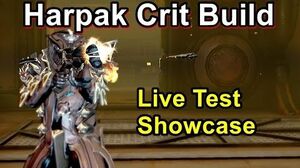 Updated Harpak Crit Build
Add a photo to this gallery

Retrieved from "https://warframe.fandom.com/wiki/Conclave:Harpak?oldid=2094186"
Community content is available under CC-BY-SA unless otherwise noted.