Update 15.0
CODEX
This jet-powered Grineer throwing mace always comes back to its owner and is even capable of disarming targets.

Grineer throwing mace similar to the

Glaive, serving as the Drahk Master's weapon of choice. Thrown attacks with this weapon will disarm enemies it hits, similar to 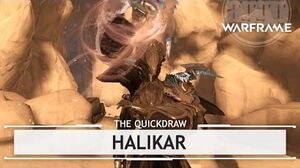 Retrieved from "https://warframe.fandom.com/wiki/Conclave:Halikar?oldid=2159475"
Community content is available under CC-BY-SA unless otherwise noted.