Slash damage and high reload speed, but with poor fire rate and low magazine capacity. The Alternate Fire is a semi-automatic fire that throws three knives horizontally with increased damage but with fire rate, as well as being unsilenced. 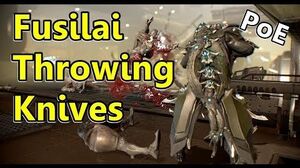 Retrieved from "https://warframe.fandom.com/wiki/Conclave:Fusilai?oldid=2017349"
Community content is available under CC-BY-SA unless otherwise noted.