A pair of daggers using the same technology as the

‍5,000. Currently there is no perennial way to re-obtain the Ether Daggers after they have been sold, other than occasional special event rewards. 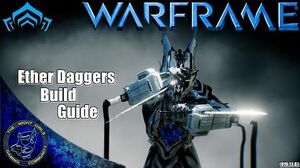 Retrieved from "https://warframe.fandom.com/wiki/Conclave:Ether_Daggers?oldid=2036739"
Community content is available under CC-BY-SA unless otherwise noted.