Update 16.0
CODEX
A master of the deadly elements, Chroma can alter his damage output by changing his energy color.

This is Chroma, an ancient legend, master of the elements.

When all the land is in ruins, Tenno, only Chroma will remain.

The bestial avatar of the primal forces of nature, Chroma, confounds his foes and strengthens his allies with elemental caprice. Chroma awoke in Update 16.

Chroma's main blueprint is rewarded upon completion of the quest The New Strange.

Component blueprints are awarded by completing Junctions. The Neuroptics will be rewarded after completing the Uranus Junction, the Chassis the Neptune Junction and the Systems the Pluto Junction.

See Category:Conclave:Chroma Prime Guides to read user-made guides on how to play this Warframe.

Chroma can alter his abilities to match any basic (uncombined) elemental attribute of the player's choice. This change is performed by customizing Chroma's appearance outside of a mission, specifically his energy color. Color choices are grouped into four categories with each category corresponding to a given element:

While customizing his energy color, Chroma's active element is displayed in the form of an icon (

). This imgur album can serve as a reference for future color palette purchases. 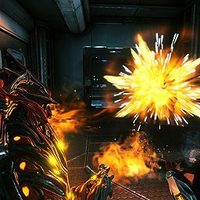