Vanilla
CODEX
Ash is great for players looking for a more stealthy approach to combat. Lethal abilities are complemented by powers of distraction.

This is Ash, lethal and elusive.

Ash can remain unseen, but his effects on the battlefield can be felt by all. Keep an eye out, Tenno.

Ash is a fast, maneuverable Warframe that possesses a high degree of survivability in the field. Fleet movement complements deadly tools of assassination, making Ash a perfect balance between killing potency and stealth.

Ash Prime is the Primed variant of

polarity. Ash Prime was released alongside

Vectis Prime and Carrier Prime (the latter of which is not available in Conclave). 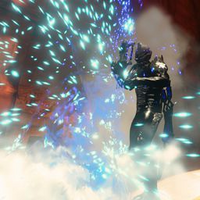 Tear Gas is a Conclave-exclusive Warframe Augment Mod for

Cite error: <ref> tags exist, but no <references/> tag was found
Retrieved from "https://warframe.fandom.com/wiki/Conclave:Ash?oldid=1732827"
Community content is available under CC-BY-SA unless otherwise noted.