Artemis Bow Augment: Fires a single arrow that has +50% Critical Chance on Headshots and explodes in a 7m radius. Removes Punch Through.

Concentrated Arrow is a Warframe Augment Mod for Ivara 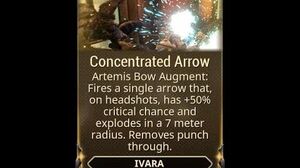