WARFRAME Wiki
Register
Don't have an account?
Sign In
Advertisement
in: Sword and Shield, Melee Weapons, Silent,
and 5 more
English

CODEX
Baruuk's signature weapons: a sword of retribution, a shield of restraint. In Baruuk's hands, and his hands only, Cobra's first strike in a combo renders his foe unconscious.

Baruuk's signature sword & shield, possessing a high status chance and its shield can be thrown similar to the

Sigma & Octantis. When used by Baruuk, the first strike of this weapon will put enemies to sleep.

The Cobra & Crane's blueprint can be purchased from the Market. 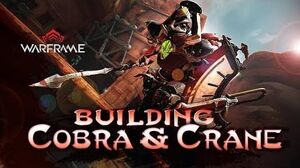