He's a special guy, you know. Little weird but a hell of a fighter.

—Clem, about pretty much everything.

Clem is a Grineer defector who serves as one of Darvo's undercover contractors, providing the merchant with information. Born with a cloning mutation that allowed him to disobey the Twin Queens, Clem is nonetheless capable of holding his own against his former comrades with his choice weapons; the

Aside from his disloyalty to the Queens, Clem's mutation seems to be responsible for several noticeable differences, such as his shorter stature and limited vocabulary (solely consisting of "Clem" and "

Grakata", aside from grunts and sighs). In spite of this, Clem can understand and follow orders (typically from Darvo) and is a far more capable fighter than the average Lancer, easily keeping up with the Tenno he occasionally assists during missions.

A Man of Few WordsEdit

Darvo asks the Tenno to rescue Clem, who is in a prison complex located on Uranus, as the merchant fears his contractor will be executed by Clem's former leaders. After the Tenno rescue Clem (including encounters with his jailers, The Grustrag Three), Darvo arranges a plan to retrieve Clem's weapons and acquire an Orokin relic (which Clem was presumably in charge of getting before being captured). Clem and the Tenno succeed in retrieving the relic — the Potent Orokin Technical Augmentation and Tactical Offensive device (the POTATO)— and after Darvo thanks the Tenno for their help, Clem can be seen in any Relay, either at Darvo's side or serving as Steel Meridian's Medallion trader.

The reward for the mission is a Clem Clone Blueprint. The mission can be completed once per week, resetting every Monday. 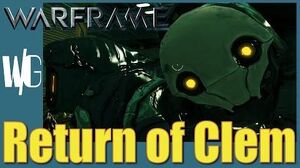 Retrieved from "https://warframe.fandom.com/wiki/Clem?oldid=2157760"
Community content is available under CC-BY-SA unless otherwise noted.